There were two types of London bus stop.

The sign for one had a white background, and buses always stopped there whereas the sign for the other had a red background and was marked as a 'request' stop. Buses only stopped there if a passenger inside the bus rang the bell or if someone at the request stop held out his or her arm. Both had BUS STOP written inside the crossbar of the London Transport symbol and the request stop had REQUEST written at the bottom edge.

The picture shows a request stop with a woman hailing the bus to ask it to stop. 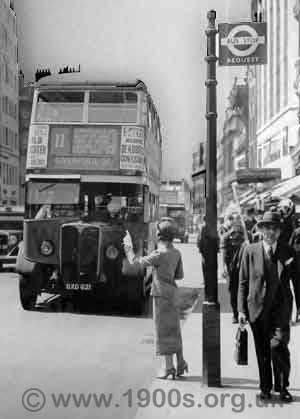 Hailing a London bus at a request stop by holding out the left arm. A detail from a photo in the London Transport Museum.

Differences between the old bus signs and those of today

As shown in the old photo, the bus sign does not have any other signs attached to it. In contrast, today's London bus stops tend to have additional signs below them such as the fare stage, i.e. the name of where the bus stop is, and the numbers of all the buses that stop there. Some also have a computerised display showing when a particular bus is due at the bus stop. All helpful additions which did not exist when I was growing up.

Waiting for a bus at a bus stop

Waiting at a bus stop was frustrating because there was no way of knowing how long the wait would be. It was rare for a timetable to be posted up, and timetables were unreliable anyway.

In all but the warmest of weathers, waiting was also a chilly business because bus stops were located in prominent positions so that they could be seen. This meant that the wind caught them. Shelters were rare and, if they did exist, they were open at the sides or bottoms, presumably to prevent litter collecting. So feet got very cold in winter. Or perhaps the problem was with the shoes that we wore.

Waiting for a bus at a bus station / terminus

As London buses had no doors, there was nothing to stop us waiting inside a bus at a bus station.

As Edgware, where I lived, was a terminus for the buses in the area, at least the waits for our outward journeys were out of the wind.