The bus tickets that I best remember are those from when I was a young child in the 1940s. By the 1950s, I was old enough to travel quite long distances on my bicycle, which I used in preference to buses because it was free and did not tie me to a timetable.

The 1940s tickets were on a rack which the bus conductor carried, and they were held in place with springs as shown in the photographs.

A rack of bus tickets as held by bus conductors on London buses during and just after World War Two. Note the old money overprinted on the tickets, with their fares ranging from 1 old penny to 7 old pennies. Also note the spring fasteners that kept the tickets in place while enabling the conductor to pull out a single ticket easily for each passenger. 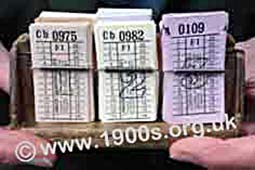 Smaller ticket rack for use on short journeys, photographed in London Bus Museum at Brooklands

Each denomination of bus ticket was of a different colour and had various destinations and fare stages printed on.

The ticket system for trams was identical to that on buses. 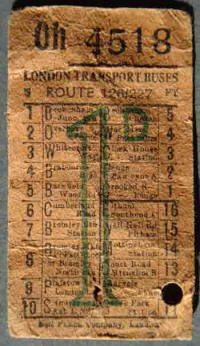 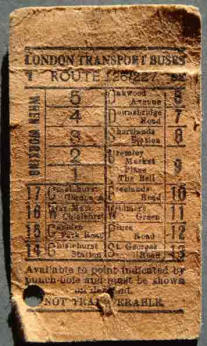 Front and back of a used 1940s London bus ticket showing its price and a punch hole indicating the bus stop where the passenger must get off. Courtesy of Francis Duck.

Tickets had to be kept carefully until the end of the journey.

One reason was that every so often a ticket inspector would board the bus at a bus stop along the route and check everyone's ticket.

Another reason was that buses often broke down, which I suppose was due to the lack of availability of parts during the shortages of the war and the years of austerity afterwards. When this happened, all the passengers had to crowd out to wait for the next bus to come along. Then they had to show their tickets to the new conductor in order to avoid double payment.

An unofficial use for used tickets

As lads at that time we used to raid the used ticket box on the rear platform of buses to obtain more tickets for our used ticket collections. 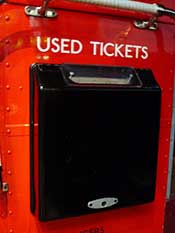 Paying the right fare for a bus ticket

Passengers had some check on the fare they should be paying because a grid showing 'fare stages' between bus stops was displayed in the bus, usually above the luggage hold. Fare stages were usually between fairly well-used bus stops. 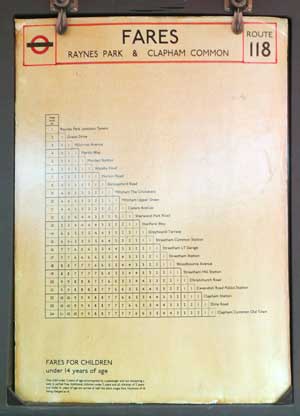 Some years after the war a new type of bus ticket was introduced. The paper was on a roll and tickets were printed specially for each customer's journey. The bus conductor had the machine round his neck and shoulders and operated it with a handle. Out popped the ticket which he tore off and gave to the passenger. These tickets had to be kept during journeys, just as the earlier style tickets had been. 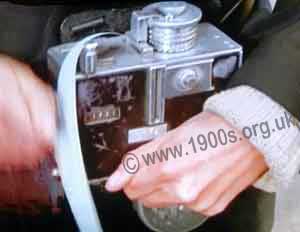 One of several types of machine for printing bus tickets, carried by bus conductors over the shoulder on a belt, c1960s.

The style of machine in the picture looks typical of those used on the former Southdown buses here in Sussex. The more typical London Transport bus conductor's ticket machine of the period was the Gibson, a distinctive chunky bull-nosed one with a ticket winder handle on one side and a fare selector wheel on the other. In Horsham (the outermost southern limit of what was then the large London Transport Country Buses green bus network), it was used extensively in the 1960s and early 1970s including the 'alien' red ones that were drafted in because of the-then bus shortage.

I well remember one day the bus turning round fast when the unfortunate conductor's neck strap broke and the machine rolled off the open rear platform and onto the road.

Date of the changeover from rack to machine bus tickets

In Morden in Surrey, the changeover from rack tickets to machine must have taken place sometime before July 1958. I remember because I left my primary school then and my class always used to go by bus to the swimming baths weekly. It was fun to compete to get hold of the bus tickets – all 23 of them, which spewed out in a long strip as shown in the photo.

Drivers selling bus tickets from their driving seats as passengers got onto a bus was years away. When it came, it must have saved money for the bus companies because one person rather than two were required to staff each bus.

The machine for printing bus tickets was mounted in a cradle on the internal driver's half-door of the later pay-as-you-enter buses.