Trolleybuses for comfortable road travel in the past

A guest contribution by David Pickles

Trolleybuses were normal-sized buses that were powered by electricity taken from two special overhead wires suspended above the road using a pair of poles (called 'trolley booms') mounted on the roof. Thus trolleybuses could only run on roads with the appropriate overhead wiring.

The booms rotated to allow trolleybuses to drive from side to side round parked cars and other obstacles. This made them more manoeuvable than trams which were confined by their rails in the roads. 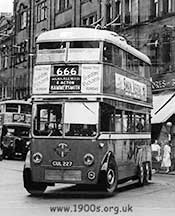 Above: Detail showing its booms

On top of each boom was a small running wheel which picked up the current from the wires. The sound of the wheels on the wires was unique.

Trolleybus travel was popular and in the London rush hour a trolleybus could arrive every 2-3 minutes.

My interest in trolleybuses started at a very early age of around 3 in the 1950s. As a small boy the world seemed to exist solely of overhead wires. Outside were overhead wires in the streets for carrying power for the trolleybuses - more of which below. 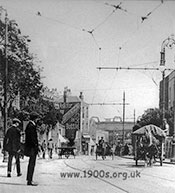 Even indoors, a fair number of shops had a wire system overhead called a flying fox where cash was sent to a central cashier and the change with a receipt was pinged back to the various departments.

If a trolleybus needed to switch to another set of wires to turn a corner, there was a pulley on a designated lamppost which the conductor would pull down to activate the switch. These changeover points were known as frogs and they worked in rather the same way as points on a train line. It was a common sight to see the conductor alight from the trolleybus just before a junction to pull on the frog. On the route 669 from Stratford Broadway to North Woolwich there were approximately four such frogs. 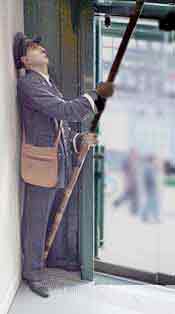 Quite often a boom on top of a trolleybus would come away from the wires, usually because the driver had gone too fast crossing a junction. This caused an immediate loss of power and the trolleybus would come to a standstill in a matter of a few seconds. A dewirement, as it was called, was a cause of great frustration for the cars and lorries following behind. I saw it happening many times.

History and range of the London trolleybus system

The early services and trials began around 1911 and the very last trolleybus to run in the UK was in 1972, in Bradford. I will focus, though, on the London system, for that is where my interest in trolleybuses started.

The London system was, at one time, the largest by far in the world with a total of almost 1800 vehicles.

The first trolleybuses in the London area ran in the south-west of the capital, around Kingston, Twickenham and Wimbledon in 1931. In 1933, by an act of Parliament, London Transport was formed and it subsumed the old private companies that had run tramways and then trolleybuses.

Our local route was the 669 which ran from Stratford Broadway - not a stone's throw from the site of the 2012 London Olympics - to North Woolwich, another fascinating part of London for someone as young as I was then. A day out with my mother was a ride on the trolleybus to North Woolwich, then a trip on the free ferry to South Woolwich, on the opposite side of the Thames.

The London trolleybus system was vast, and stretched from Sutton, Kingston, Twickenham and Wimbledon in the south west, to Barnet and Cockfosters and Waltham Cross in the north, to Woodford, Barkingside and Ilford in the east, and Ealing, Acton, and Hammersmith in the west. With one exception - as outlined in the next paragraph - it was technically possible for any trolleybus to travel from any point in London to any other.

The south-east system was entirely separate from the rest of the network. It ran from Woolwich down to Bexley and Dartford via Crayford. There had been a plan before the World War Two to cover the area with trolleybuses to replace the trams, but the war intervened and the damage to overhead wires during the blitz highlighted the limited capacity of the trolleybus to move around air-raid damage and road works. So the south-east system remained isolated.

Why I liked trolley buses

I loved trolley buses. They were comfortable, quick and quiet, and they seemed to be fitted with particularly comfortable suspension. We would often let a couple of double-decker buses pass if we knew that a trolleybus would soon be along.

From the perspective of today, trolleybuses were years ahead of their time: They were 'clean and green' because the ran on electricity. They even had their own batteries which could power them up to around four miles to different parts of the network or to the depot if their booms became damaged.

It is surprising that these advantages seem to have been treated as of little consequence at the time, particularly in view of the serious pollution due to coal fires in the home and for industrial use.

The advantages of trolleybuses that the people of the time valued is described in the coloured box.

The end of London trolleybuses

Although 'clean and green' methods of moving people around is very important today, the London trolleybuses didn't last for much more than the first half of the 20th century.

In 1954 London Transport decided to abandon the trolleybus system, citing its lack of freedom to move from one side of the road to another, around accidents or road works.

I well remember with great sadness not long before my 5th birthday, that most of the routes in Plaistow where I lived had closed. Waiting at the bus stop with my mother and looking up at the site of the wires cut down or tied together around the lampposts had a strange effect on me. A few routes were left running for another 2 months or so, but the inevitable end of the trolleybus in the east end of London was a time of sadness for one so young.

From humble beginnings in the south west of the capital to the very last trolleybus that entered Fullwell (near Twickenham) depot in the early hours of 9th May, 1962 the London trolleybus system had been the largest in the world, and for those of us who travelled on it, even as fascinated youngsters, was something that has become indelible in our lives. 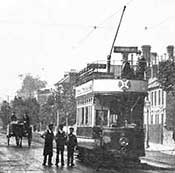 An old tram which needed just one boom