Statistics, recollections and fear of the WW2 air raids

Some statistics on the effects of the German bombing

2 million British homes were destroyed in the German bombing of World War Two. 2¼ million people were made homeless and 45,000 civilians lost their lives including 8000 children.

quoted in the TV programme 'Turn Back Time'

There were 250 000 people displaced [from their homes] in the first six weeks of the Blitz, from September 1940. This figure rose to 1.4 million by June 1941 in London alone. One in every six Londoners.

What the Blitz was

The Blitz was the name given to the heavy and frequent bombing attacks on Britain in World War Two. The name was short for 'blitzkrieg which was German for 'lightning war' or 'lighting strikes'. The latter indicated that the strikes came so rapidly that they seemed to come totally unexpectedly out of nowhere. Of course in practice, they were expected - every night.

Homelessness and being 'bombed out' 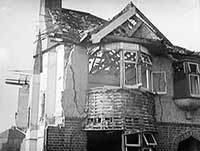 A bombed out house. Screen shot from a newsreel. This photo is particularly poignant for me because it is just like the 1930s suburban house in which I grew up. It could so nearly have been the end of me and my family.

The families whose homes were made uninhabitable were said to have been 'bombed out'.

I don't think that my father's family ever quite got over the experience of being bombed out - but they were by no means alone in their suffering. Many other families could tell similar stories. On this page are contributions from other such families.

'Safe as houses' was a maxim that meant nothing ... with the dust [from bombed out buildings] drifting around London, fine brick dust that got in the eyes and made women's black clothes look grey and unfresh.

An experience from London's East End which was particularly badly hit

Some raids are wall to wall explosions. I don't know how many tons of the stuff we get dropped on us, but it's a lot because those bastards just don't stop. Wave after wave. I know our anti-aircraft guns are somewhere but you can't hear them, not when you've been half deafened by bombs going off.

As for the homes which were damaged rather than totally destroyed, the box below tells a story which is somewhat amusing in hindsight, although it certainly would not have been at the time.

On Tulse Hill1 there was a mansion,
Victorian period, brick and stanchion2.
We shared it with others, having the ground floor,
'Till March 21st, when it became no more.

Woke in the night to the siren's scream,
Ending whatever was my childlike dream.
"Get dressed, Son! You have to hurry.
Do as I say, no need to worry!"

Out in the courtyard the scene was shock,
With fire tenders3 all around the block.
On the upper floors, Dad helps where he can.
A blast wounds a neighbour, poor man.

Moving incendiaries is a difficult job.
They explode and burn if you cannot lob
Them out of the window where they'll do less harm.
All about us is haste and alarm.

A nurse attends, tries to find me a bed
For the night. "Can you walk, Son?" she said.
"Of course I can walk, I'm four!"
Then she takes me to a welcoming door.

A fitful sleep returns at will.
In the morning the family go back to Tulse Hill.
The house is a wreck, its roof is gone.
It soon becomes clear that we'll have to move on.

Upper floors of the building are quite unstable.
The breakfast cloth is shrapnelled4 to the table.
Above my sister's cot, lodged in the ceiling
Is an unexploded bomb; leaves a funny feeling.

Goodbye now to London shattered in dark.
Goodbye to the gnomes of Brockwell park.
Back to the countryside we retreat.
Repelled by the German bombing fleet.
___

1. Tulse Hill is part of south London
2. A stanchion is an upright bar or post, often providing support for some other object.
3. A fire tender is a specialized vehicle capable of bringing water for fighting fires.
4. Shrapnel is a collective name for the sharp metallic fragments thrown out by an exploding bomb or shell.

A landmine dropped opposite our house. Fortunately it had got caught in a tree which meant that the damage was less than it would otherwise have been. At daylight we went to look over our poor house, and the thing I remember most clearly concerned a bowl of tinned peaches which had been left out on the kitchen table. It had been showered with plaster from the ceiling. This was quite a tragedy at the time because of rationing and the shortages. I doubt if we were able to buy any more until after the war.

Damage from an incendiary bomb

My uncle had an incendiary bomb that come through the roof. It left a hole in the ceiling and lodged itself inside the piano, but it failed to go off. The bomb squad defused it, and took it away.

The siren warning would go off and all we could hear would be the sound of bombers coming towards us. The bombs would start coming down.

This was the first blitz which went on every night for three months. I can still hear the crunch of the bombs and the ground shaking.

We lived in hope and fear. Although not a religious family, when the bombs and doodlebugs were falling we held each other and said a silent prayer.

Worst of all one night was when my mother was screaming that my father was not home yet, and had he made it to a public shelter? He did come in, but all shaken up. He told us that he was just coming up Silver Street by the Middlesex Hospital when he was blown off his bicycle by a bomb blast.

Something rarely mentioned are the mental traumas suffered by civilians as a result of the war. Having been bombed out of our home, my family were housed in a Displaced Persons Camp. A few huts from ours, a perfectly nice lady took up an axe - axes were readily available because we all needed to be able to chop firewood - and, screaming, hacked her way out of her hut through an unlocked door and headed away along the line of huts. My mother walked quietly up to her and asked if she could have her axe, and the lady quietly handed it over. My mother calmly explained, "Shell shock".

Although there were many other experiences of odd behaviour of such kind, I have no personal recollection of a shell shocked person intending harm to anyone else.

The extraordinary became the accepted

My family having become 'displaced persons' nearing the end of the war, I was sent to a government institution, Fortescue House School in Twickenham. Here, a V1 'Doodlebug' had landed on the school playing fields and a good number of boys residing at the school had been injured, mostly by flying glass. All the twisted remnants of the bomb had been left piled into the bomb-crater. When I attended the school, this pile of rusting metal had innocently and merely become regarded as 'home' for such games as 'tag'.

Failure of the warning siren

Before a raid the air raid siren would normally sound a warning that we were about to be attacked, which would give us time to get to a shelter. On one occasion, though, there was nothing. The first we knew was when we heard the bomb whistling down. We all dived under the dining table. The family in the house that was hit was sitting having their evening meal when the bomb exploded in the middle of them killing them all instantly.


The house next door is hit

One evening when the air-raid siren went, my father ushered my mother and baby brother outside into the Anderson shelter. Because I was in my pyjamas I waited at the back door and my father returned to carry me to the shelter. We were half way down the garden when the air was riven by the sound of a falling bomb. Father threw me to the ground and fell on top of me to protect me. There was an explosion and what sounded like rustling leaves. It was actually the sound of the hedge just above our heads being shredded by glass and other debris from the next-door house which took the hit.

Enforced birth miles away in the fear of air raids

When my mother was pregnant in Dagenham during the height of the Blitz, she was told that, for safety's sake, she would have to get herself to Rugby to give birth there in hospital. She was told that this was necessary because the whole of the North Thames area was 'bomb alley' and Dagenham was "right in the firing line". Of course, it was a tedious trip for a woman 8+ months pregnant, but she did it. Then three days after I was born, she had to get herself and her new baby all the way back to Dagenham! I wonder who was the fool who made these dictates? She was away for about ten days altogether, and then right back in the firing line of the blitz and subsequent V1s and V2s.