Rules for bicycles, cars and other vehicles in the WW2 blackout

The World War Two blackout of homes and other buildings was to prevent enemy aircraft seeing lights that would suggest a populated area or factory, but lights on vehicles were also affected. Clearly vehicles couldn't travel safely with no lights at all, but they had to be dimmed and directed downwards onto the road ahead. 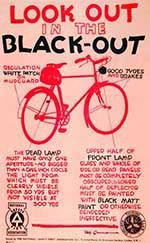 Poster on obeying blackout regulations for a bicycle. Tap/click for a larger, legible image. The logo on the lower right is of the Cyclists' Touring Club.

How bicycle lights were dimmed and masked in the blackout

The poster illustrates and labels the requirements for dimming bicycle lights:

As a young child, I knew nothing of these regulations and was seldom out after dark. Nevertheless, I do remember seeing the white patches on the backs mudguards of bicycles. I assumed, at the time, that it was simply fashion.

In addition there was the requirement for good tyres and brakes.

How car lights were dimmed and masked in the blackout

For cars - and presumably for other vehicles - there was the requirement of good tyres and brakes, a clean windscreen and for doors to be locked for parking with the ignition key removed. Cars were not be left outside overnight.

The rules specifically for the blackout were quite stringent:

Types of masks for headlamps. Screenshots from wartime films.