The skies over the Britain in WW2 air raids and dogfights

Air raids were - I am ashamed to say - enjoyable experiences for a very young child. I can't remember my first one because there had always been air raids as far as I was concerned, and it never occurred to me that I could possibly be hurt in one. I was born three months before the start of the Second World War. 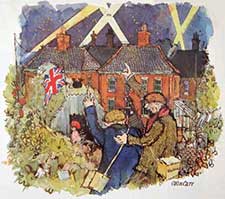 Searchlights during air-raids. A sketch from a magazine cutting from the effects of my mother. Note the Anderson shelter and the shoulder bags containing gas masks being carried by the people.

Sometimes when the houselights were off, I would peep through the blackout curtains at the outside world. The searchlights flickered across the sky trying to seek out enemy bombers to shoot down. I thought that the lights were pretty.

Yet years later when I saw laser lights as part of the Christmas decorations in London's Oxford Street, a shiver of recollection ran down my back. So perhaps I was more scared than I realised at the time, or maybe I had developed a better appreciation of the dreadfulness of war.

The meaning of 'dogfight'

Many of the following recollections use the term 'dogfight' which may be new to anyone born after the war. At the time, it was in everyday speech. The web dictionary defines it as:

A close combat between military aircraft

Recollections of the skies in air raids

Where my family lived in Orpington, Kent, we were on the flight path from Germany to London. Biggin Hill Aero­drome was also nearby. So we were very much affected by air raids. I remember watching with fascin­ation the dogfights between fighter planes in the skies above us, and at night I slept under the stairs - said to be strongest part of a house, with my parents also squeezing in.


Sometimes my father would "take me up" - i.e. out of our Anderson shelter - to see what was going on. The shelter faced eastwards from Edmonton towards Chingford across the Lea Valley and its factory estates.

In front of the shelter doors was a blast wall - a thick brick wall designed to do as its name suggests. We often used to stand behind it, watching all of the planes and searchlights in the sky, the 'tracer' bullets and general hubbub. I think that the 'tracer' bullets got their name because they somehow glowed enabling the gunner to see the trajectory and thus trace and refine his aim.


When a bomb went through the top of one of the gasometers in the gasworks along Angel Road, Edmonton, about a mile due east of us. As you can imagine, the flames shot several hundreds of feet up into the air. The pitch dark of the blackout was no longer, what with the searchlights and flashes, etc. 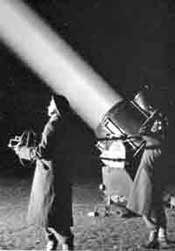 Ground staff operating a searchlight. Detail from a screen shot of an old film.


As I was born in 1937, I was still quite young during the worst of the air raids. Even so, I remember, one night my father holding me up to the windows during the blackout, and everywhere around was a red glow where the bombs had fallen. We were lucky in Hazel Close, where we lived, though, because there was an anti-aircraft battery nearby, so the German aircraft tried to avoid the area.

German planes overhead on their way to bomb Coventry

During an air raid, particularly the one on Coventry, the night sky glowed orange and red. Down below looked like a giant bubble bath from the shock waves from the bombs and shells exploding.


My father took me out into the garden to see great numbers of German planes flying overhead. We were in Great Shelford, near Cambridge and there is speculation that the planes were on their way to bomb Coventry. There were masses and masses of them, in formation of fours as I seem to remember.

The skies in the Battle of Britain

The Battle of Britain began on 10 July 1940 with a series of co-ordinated German air raids on shipping convoys in the Channel. RAF Fighter Command shot down 14 enemy aircraft and severely damaged 23 more at the start of a pivotal fight for aerial supremacy that lasted more than three months. The 3000 RAF fighter pilots held off the enemy, forcing Hitler to cancel the German invasion of Britain. This prompted Sir Winston Churchill's famous words, "Never in the field of human conflict has so much been owed by so many to so few".

I vividly remember passing days in 1940 in my grandmother's back garden, in glorious weather, watching the aeroplanes weaving, turning and fighting each other in the sustained air campaign known as the Battle of Britain. I seem to remember that our planes were silver and the enemy's were black, but that may have been childhood fantasy. Anyway, ours won - thank God!


Little did I appreciate the stress and strain of the Spitfire and Hurricane pilots in the sky above me, locked in deadly combat with their enemies. It would only be when there was a momentary burst of gunfire from one of the planes that my schoolboy friends and I would leap from our bikes and run. Then we did appreciate something of the terrible danger these great RAF heroes were in. The occasional vapour trail left by a plane in the clear blue skies above our heads, the flash of sunlight from some part of one of the many planes, twisting and turning in and away from one another. It was like some macabre aerial ballet. Quite beautiful, but totally deadly.