Why windows were taped

As people could be injured from the flying glass of broken windows during air-raids, many households taped up their windows to hold the glass shards together.

My mother said that taped windows too depressing and chose to live with the risk.The photo, though, shows a house with its windows taped up against flying glass. It was taken while my grandmother was on holiday on the coast near Dover, which was directly below the flight path of the German bombers targeting London.

The tape for taping windows

Each house was provided with some rolls of gummed brown paper about 3 inches wide for sticking to the inside of all the windows from corner to corner in a diagonal pattern to prevent shards of glass from flying into the rooms in a bomb blast. House windows taped up to prevent flying glass from bomb blasts during World War Two. Family photo taken with the intention of showing my grandmother, aunt and baby cousin. 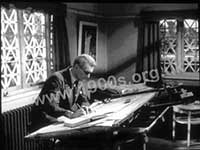 The tape had to be moistened with water to become sticky, just like old style postage stamps. As it dried it stuck to sufaces. Self adhesive materials were years away.

A common name for window tape

I recall that the tape on windows in World War Two was commonly referred to as 'scrim'.

Although I wasn't old enough to remember the term 'scrim' for taping windows - as mentioned above by Robert Priddy - it certainly doesn't surprise me, as 'scrim' is commonly used in the building trade today for sticking sheets of plasterboard together. This scrim is a woven open tape which is very thin.

My recollection is that the tape used on the windows came on a reel like sellotape, but it was brown paper which was gummed on one side. The gum became sticky when moistened, just like the postage stamps of the time.

Another type of tape comes to mind. It was called 'passepartou' (French for 'fits all over'). It was used for sticking all sorts of things, like sticking shut the back of a photo frame or doubling as cheap frames for photos. It was more expensive than the brown paper variety.

Celluloid as a replacement for window glass

The ARP (Air Raids Precautions) recommended two other ways of preventing flying glass from shattered windows. One was replacing the glass with specially strengthened glass or with celluloid.

I did see celluloid replacement side windows in cars after the war was over, and it was always cloudy and with cracks. I doubt whether anyone would have wanted it for windows of houses, and I doubt if strengthened glass was widely available or even up to the job.

The ARP's other recommendation was sandbags. However well sandbags would have worked to prevent windows from shattering, they also kept out light which was very depressing. Of course I saw widespread use of sandbags to protect the walls of buildings, but I only ever noticed windows protected with tape.

My experience is of living in the wider London area where a wide mesh was glued onto the windows of trains. The glue distorted he view out. I can't remember it on buses and don't know if it happened in other city's transport. If you know, I would be grateful if you would let me know.