The head of the monarch on postage stamps

In the early part of the mid 20th century, stamps showed the head of George V and then briefly that of Edward VIII.

Edward VIII was only king for a very short time as he abdicated in favour of George VI. Only four stamps were produced during his short reign. He broke with the tradition of of alternate monarchs' heads facing opposite directions. 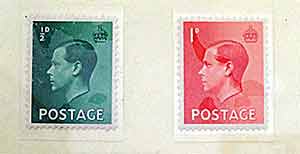 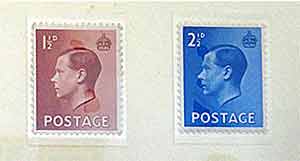 Position of the crown on King Edward VIII postage stamps

Another interesting feature of the Edward VIII postage stamps is the position of the crown. Whereas the crown of the other monarchs is shown above their heads, these crowns were offset, because Edward VIII never had a coronation. He abdicated before it could take place and was known as the uncrowned king.

The earliest stamps in general use that I knew as a child showed the head of George VI, shown in the next section on stamp duty.

Then when George VI died, stamps showed the young head of Queen Elizabeth II. For pictures of these stamps, see the photo of postcards below which opens on click to a larger image. 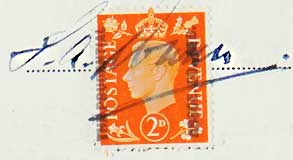 A George VI postage stamp used to show payment of purchase tax with the signature of the recipient across it.

As well as showing the amount paid on postage, stamps were also used to collect a tax. Stamp duty, as it was called, was a form of purchase tax, so called because it was paid with a postage stamp stuck onto the receipt of purchase. To show who was paying and to prevent the stamp being used afterwards for sending letters, etc, the person paying signed across the stamp, as shown in the picture.

Below is an example of stamp duty to collect tax earlier in the century. 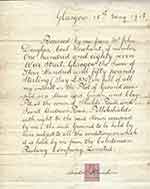 Receipt for house purchase in 1918 with a signature across a George V stamp, courtesy of Frank Jackson

Tap/click the thumbnail for a full-size, legible image and note the beautiful copper-plate handwriting that we could only achieve today with a computer.

Stamp duty was paid automatically whenever a purchase was made by cheque.

The payment of stamp duty was indicated by means of an impressed stamp made manually by the counter hand. Then in 1956 banks were allowed to issue cheque books with the stamp duty mark already in place. The duty was abolished on 1 February 1971, shortly before decimalisation on 15 February 1971.

If a customer requested cash over the counter, he or she had to pay 2d for stamp duty using what was called a counter cheque.

I never saw books of stamps until much later in the century.

Stamps could be bought at a post office. They could not be bought in normal shops. They came in large sheets and whatever number one wanted to buy were torn off from the sheet. This was straightforward because every stamp was perforated round the edges to guide the tears. These perforation marks are visible round the edges of all the stamps in the photos on this page.

How stamps were sold in vending machines

There were coin-operated stamp machines outside post offices and in various other places. They were dispensed in strips, i.e. with no wrapping of any sort. There were no books of stamps. 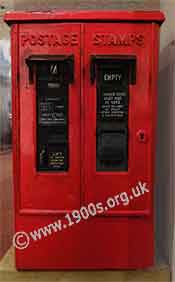 The glue on postage stamps

All the stamps stuck onto the envelopes with a type of gum or glue that was non-sticky when dry and which had to be moistened to become sticky.

As with the flaps of envelopes, most people simply licked, although businesses had special arrangements of sponges in water.

There was no such thing as a first or second class of postage. The Post Office simply dealt with all mail as quickly as possible - a much more efficient arrangement in my view.

Post to Australia took six weeks by surface mail. Presumably mail to other overseas countries also took a long time, but I don't know how long. There was airmail but ordinary families would never have dreamt of using it because of the expense. Not surprisingly families lost touch with one another after an emigration.

Perforated markings on stamps - the alternative to franking

Today, effectively no business envelopes carry stamps. Instead the businesses frank them before posting, to show that the cost of postage has been paid while also carrying publicity for the business. I can't remember any post (ie mail) being franked by the sender while I was growing up in the mid-20th century. Businesses used stamps like everyone else.

Yet large businesses did use their postage stamps to publicise themselves. They did so by perforating tiny holes into their stamps shaped as some sort of simple logo.

My aunt worked for the Prudential Assurance Company (PAC) and my family would always know from the envelope that a letter was from her because of the stamps were perforated with PAC. 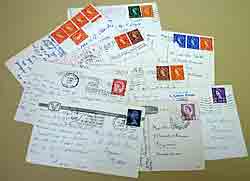 Postcards from the effects of my mother showing pre-decimal Elizabeth II postage stamps. Tap/click for a larger image which shows the PAC perforations.

In today's terms, these stamps were 'stolen' from the Prudential Assurance Company for my aunt's personal use, but she never thought of it that way. As she told me several times, "It's all right to take stamps!". Interesting - as she was otherwise of totally upright character.

One of her PAC postcards on the top of the pile of postcards in the photo. Tap/click it for a clearly legible enlargement.