The frequency of postal deliveries in the mid 20th century

When I grew up in 1940s and 1950s Britain, people letters and postcards were the main way that people kept in touch with each other. As the volume of mail (which we called 'post') was relatively large, there were two deliveries each weekday: the 'first post' and the 'second post'. There was one delivery on Saturdays and none on Sundays.

The frequency of postal deliveries in the early 20th century

The number of deliveries in the mid 20th century, though, was in stark contrast to the deliveries in the early 1900s when my mother was a child. Then it was quite normal to post a letter in the morning and get a reply that same evening. The last delivery (the fourth of the day, known as the 'last post') could be as late as 9.30 at night.

Before the arrival of the internet, there was mail-order but it was not like today. People saw adverts for goods in the papers and were asked to pay either by post with a cheque or postal order or by paying the postman who delivered the parcel or package. This latter was called C.O.D. which stood for 'Cash on Delivery'. In the 1950s, I clearly remember my mother paying cash to the postman when he delivered a package.

Dealing with the money and returning it to suppliers must have been an administrative nightmare for the Post Office.

How recipients knew when and where something was posted

Postcards from the effects of my mother. The Sorting Office's franking on each stamp named the location of the collection and the time of franking.

When our post was delivered, we immediately knew when and where it had been posted.

This was because there was a difference between how the Royal Mail cancelled stamps then and how it is done today. The cancellation always showed the time and place of posting which. You will be able to see examples clearly on the large version of the photo of the postcards. Tap/click it to enlarge it. 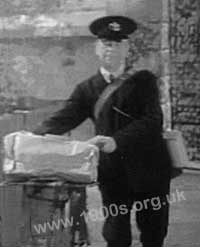 Postman arriving by bicycle to deliver a parcel

My mother describes postmen's uniform in the early 1900s, When I was a child in the 1940s and 1950s, postmen always wore dark navy uniforms with peaked hats rather like those of bus conductors.