How to save on letters and postage, mid-20th century UK

During the Second World War and in the years of austerity afterwards, it was common to save on notepaper and reuse envelopes with what were called economy labels. These were brown paper, gummed on the back and of a size and shape to stick round a used envelope and take the new address and postage stamp - see the picture. 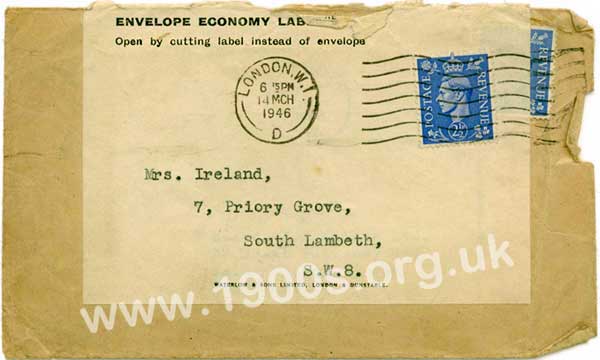 Economy label enabling a used envelope to be re-used, courtesy of Gwen Nelson. Note the lack of a modern postcode and that the address is clearly typed on an old manual typewriter.

How economy labels were used

When a letter was received, it had to be split carefully along the top and not torn. Then, for the next use it was resealed with an economy label

Businesses, particularly those which sent out invoices requiring cheques or postal orders in payment often included economy labels for replies. These were ready printed with the return address and were often ready stamped or franked.

Economy labels were too lightweight to affect postage costs.

Air mail postage was expensive and costed by weight. So weight needed to be kept to a minimum. Hence the use of very lightweight paper, known as air mail stationery. Air mail stationery consisted of special flimsy envelopes and flimsy writing paper. Both were readily available in various stationery outlets like Smiths. The air mail envelopes always seemed to have the British colours of red, white and blue round the edge.

Letters posted with this type of stationery needed to be weighed at the post office. Then the appropriate postage stamp needed to be bought and stuck on the envelope. 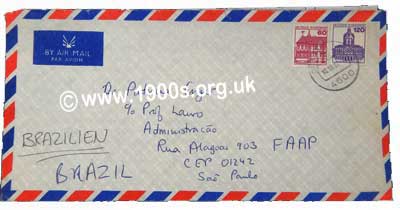 An air envelope for a letter

Incidentally mail to Australia and New Zealand normally went by sea in the early days because the much air mail was prohibitally expensive. But sea mail took a very long time - six weeks in the case of Australia. This meant that the time from sending to receiving a reply took at least three months! I always remember my utter amazement years later when I emailed Australia and got a reply the same day! Now communication is instant with video calls.

Air letters, also called aerogrammes were sold by the Post Office and could be bought unweighed in batches. This was because they were all of a standard known weight. They were ready franked and printed with the air mail logo and were always blue.

They were single longish sheets of flimsy paper which served as letters and envelopes combined. When folded into three and stuck down, they looked just like an envelope.

An air letter folded as for transit 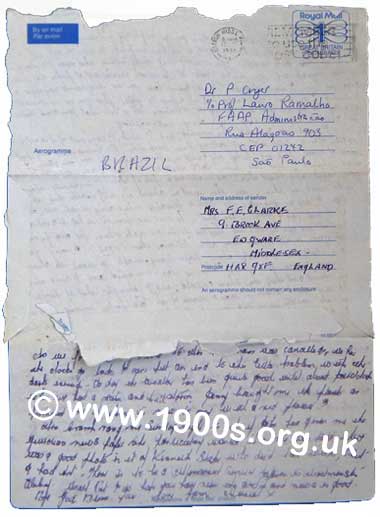 One side of an opened air letter. Part of this side and all of the other side were for correspondence.

The glue used for stamps was the sort that had to be dampened to stick. This meant that used stamps could be soaked in water making the glue dissolve and the stamp float to the surface. This was not only useful for stamp collecting. It also meant that if a stamp had missed the franking machine, which wasn't entirely unusual, it could be reused by gluing it onto a new envelope.