Paper and envelopes for correspondence before instant messaging

When I grew up in 1940s and 1950s Britain, many more letters were written than today. There was no email, and telephoning was very expensive indeed by the norms of the time. In fact telephoning has become progressively cheaper in real terms over the years. So people wrote a lot of letters.

Everyone seemed to own special paper for writing letters which they felt would reflect their own personalities. It was known as notepaper or writing paper, and was one of those standard birthday or Christmas presents when no-one knew what else to buy.

Notepaper could be any size but it was usually something between A4 and A5, not that these sizes had been heard of at the time and the Post Office did not insist on particular sizes. Foolscap was normally reserved for business use.

Probably white was the only colour available for notepaper during World War Two and the shortages afterwards, but I can't be sure. I have better recollections from the 1950s and 1960s when the most popular and widely sold colour seemed to be pale blue.

For fear of seeming pretentious, my mother, like others of her generation, seldom used dedicated notepaper for letters, even though she certainly had it. For family and friends she preferred what she called a 'scrap of paper' with a cheap brown envelope, but of course she only ever did write to family and friends. Other letters were written by the man of the house.

Some individuals and some households had their notepaper pre-printed with their address, normally at the top right hand corner of the page, but sometimes in the centre. Such paper was known as headed notepaper. It could be bought to order at any stationers and was another standard birthday or Christmas present.

Request to my readers

If you have a sample of this type of headed notepaper (not business) I would be grateful for a copy for here. Contact. 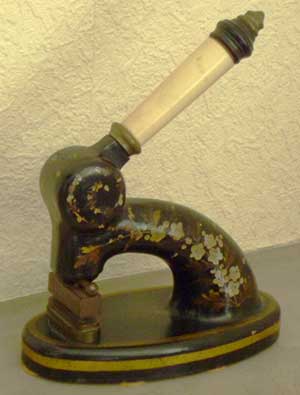 Sometimes instead of being pre-printed, writing paper was embossed at the time of use with an embosser. Embossers had to be specially made for each address or set of words, so were usually used by wealthier families, professionals and businesses. The paper was placed between the two plates - see the photo - and the lever was pressed down hard, so that the plates pressed (embossed) the address onto the paper.

Request to my readers

If you have a sample of embossed headed notepaper, I would be grateful for a copy for here. Contact.

Envelopes for social correspondence were usually bought at the same time as notepaper to make matching sets, and were of a size and colour to fit the notepaper when it was folded either into four quarters or into thirds lengthways.

Envelopes made of brown paper were cheaper to buy and were normally used by less prestigious businesses and for paying bills by cheque.

The flaps of envelopes were edged with a gum that had to be moistened to stick. Businesses that were sending out numerous letters had a sponge arrangement in a dish of water, so that staff merely had to press the edge of the flap onto the sponge to make it sticky. Ordinary people, though, simply licked. The taste was not at all pleasant but we knew no different. 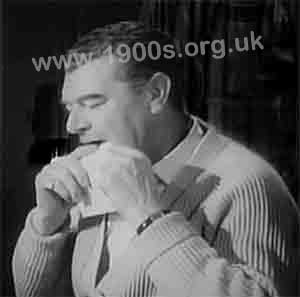 Man licking the flap of an envelope to dampen it for sticking down. Screenshot from an old film

The collective term for notepaper and envelopes was, and still is, stationery. The word was widely misspelled by school children as stationary with an a towards the end rather than the e. These days there is seldom call to use the word, although shops selling odds and ends including stationery are often still called stationers.

The end of pre-printed headed notepaper

Personalised headed notepaper started to go out of fashion in the 1960s because it so often and so rapidly went out of date. This was because people were including their phone numbers with their addresses, only to find that phone numbers kept changing, first from letter area codes to numerical ones, and then with added digits to accommodate new subscribers. Addresses also changed with the requirements for postcodes.

So people reverted to putting their addresses in handwriting at the top right-hand corner of the first page of letters. Later, as computers became common, this was replaced with computerised text.

In the 1940s and 50s the use of postcodes was haphazard and I suspect that they only existed for large cities - although I would appreciate further clarification on this. What I can say is that whenever anyone wrote to my family in Edgware on the outskirts of Greater London, the envelope was always addressed as just Edgware. Middlesex. Yet when we wrote to my parents' families in Edmonton, addresses were always Edmonton N18. Note the complete absence of any additional letters or numbers. I understand that earlier still, the postcode was just the points of the compass. I managed to find an old street sign with just points of the compass code - see below.

An early street sign showing just the points of the compass from the centre of London. This sign like all the outdoor signs before the 1950s or 60s before the advent of plastic was enamel on metal. See also adverts on station platforms.

For women, it was normal practice for the notepaper and envelopes to be kept together with postage stamps in a writing case, chosen to reflect their personality. Men had their bureaus. 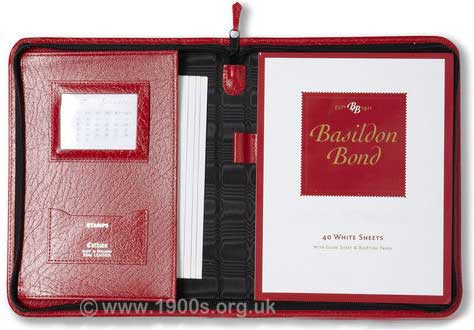 Leather writing case for women to keep their stationery.

Writing cases had specially designed slots on the right for notepapeand on the left for the envelopes, with a loop at the fold for pens. The two other slots were for postage stamps and the owner's details.

Writing cases were usually leather, and women and young girls liked them to be in a style that was like a fashion accessory. After all, they were used a great deal and were carried around. Mine was bright red leather - the one shown in the picture.

Writing cases were common fall-back presents when one couldn't think what else to buy a woman or a young girl.