My grandfather's portable Victorian or Edwardian desk lay untouched from his death in 1940 to when I opened it to photograph it. Since he lived into old age, the contents of the desk must be little different from what they would have been in the early 20th century, in Victorian and Edwardian times and even before. 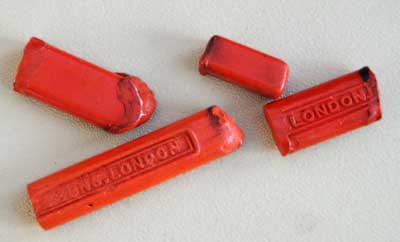 Sticks of well-used sealing wax were in the bottom compartment of the desk.

The purpose of sealing wax was to show that any sealed document had not been tampered with between sending and arrival.

So sealing wax was used for important for private documents or valuable parcels.

Sealing wax and how it was used

To use sealing wax, the sender put an end of the sealing wax strip into a flame to soften it and then daubed or dripped over the sealed or knotted part of the envelope or parcel. The sealing wax cooled and solidified rapidly, making a lump that was so brittle that it chipped or broke easily. Consequently if anyone tried to tamper with the seal, the tampering was immediately obvious.

Hot, melted sealing wax being daubed into the sealed part of an envelope.

Better-off people had a 'seal' which made a personalised impression in the hot wax, often initials or a coat of arms. It was often part of a finger ring. The likes of my grandfather, i.e. working class people, would not have owned such a thing. 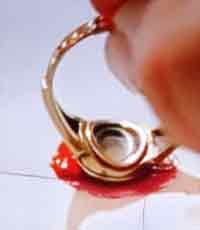 A ring with a 'seal' being pressed into sealing wax to replicate the design on the ring which was unique to the sender - usually initials or a crest.

In the 1940s my parents owned sealing wax. I only remember it being used once - and that stuck firmly in my memory because of how the sealing wax sparked while it was in the flame.

I clearly remember letters and parcels arriving with sealing wax on. Then it was mainly on the knot of the string which tied parcels.

Why my father used sealing wax

I can remember my father sealing a letter. He had an engraved signet ring and he explained that by pressing the ring into the still hot soft wax it showed it was he who had sealed the letter. No one else could tamper with it and reseal as only he had that ring.

The pens in the desk are best shown in the following photographs.

The pen compartment, with is original pens. The handles of two of the pens are bone, and the other is wood.

Pen with bone handle. Note how inky the handle is. 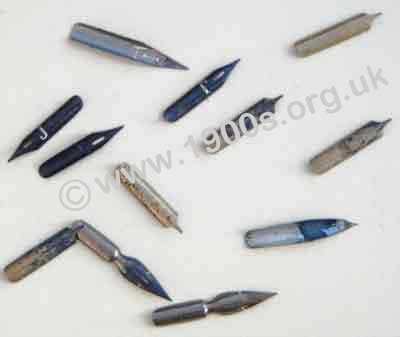 Nibs stored in the desk. Clearly these have been well-used, mainly with blue ink - presumably my grandfather's favourite colour.

Enlargement of the nib housing. There are two concentric metal grips, the outer is slit so that it can be forced open.

The nib in place, having been forced between the two grips and then held firm. When (not if) the nib breaks, it can be forcibly removed and replaced with a new nib


Miscellanea in the desk

Also found in the desk, mostly not shown, are two well-used rubbers (erasers), paperclips, a wooden pencil with a particularly thick lead, a nearly dried-up bottle of black ink, non-matching sheets of paper, brown envelopes and an unused 1939 diary. 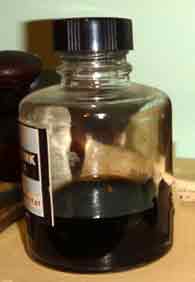 If my grandfather had not been so ill when he died, the desk would probably also have contained unanswered letters.