Picture letters and postcards before phones could send photos

After the austerity of the WW2, people were pleased to get away on holiday. They also seemed rather proud of themselves for being able to and for seeing places which were often, for them at that time, far-flung and exotic. They wanted to let family and friends know.

There were of course no smart phones. So whereas today people can send instant pictures to arrive on phones, tablets and computers, all pictures had to be sent by post. Depending of how close the intended recipient was, this could take the form of a picture postcard, a picture letter or a memento.

Picture letters were long strips of paper printed with photos of views on one side and a blank space for writing on the other. They were folded in a concertina fashion with a space at the front for the recipient's address. Picture letters were widely available from seaside shops.

Picture letter showing the picture side

Used picture letter, as opened out by the recipient for viewing 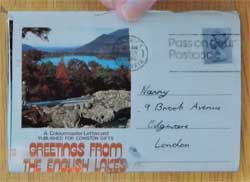 Used picture letter folded up, as sent and received

Types of pictures on picture postcards

The picture on a picture postcard said and still says a lot about the person sending. So there was a wide range to choose from, and of course there still is.

What has changed is that it was not at all unusual, particularly before the Second World War, for professional photographers to make their photographs into personalised postcards. These were circulated to friends and family as the then equivalent of 'selfies'. There are a number of them on this website, for example, the photograph of my grandfather as a special constable - not that you would know it was a postcard without being able to have the photograph in your hand and turn it over.

Pictures of where the sender was staying or visiting were particularly common, as were places of historic or cultural interest that the sender had seen or wanted to be thought of as having seen - but this is as true today as it was then.

Also very widely available - although they didn't appeal at all to me - were postcards depicting bawdy drawings, suggesting the type of enjoyment that senders wanted to imply that they were having.

When, as a teenager away from home, I sent postcards to my parents, I tended to choose pictures of where I happened to be at the time. I expected my parents to return them to me when I got home so that I could put them in my photo album.

I always found it amusing to see how different people used the message space on postcards. Some had a lot to say which resulted in cramped writing which often strayed into the margin of the address space. Other people, though, clearly didn't know what to say and were only writing because a postcard was expected. They wrote very little with very large, widely spaced writing.

At that time, postage was cheaper for postcards than for letters, and until 1968 there was no distinction between first and second class. Postage was also cheaper for letters and greeting cards if they were in unsealed envelopes.

As far as I remember, picture letters had to be taken to a post office to be weighed, as the cost of postage depended on weight, and therefore on the length of the letter. Only post offices and their vending machines were allowed to sell stamps.

Presents to take back had to be something different from what could be bought at home, so they had to be memorabilia of the holiday location in some way, like the toasting fork illustrated elsewhere on this website or specialist local food.

The practice of giving presents largely died over the years as shops became chain stores identical in every town. Picture letters also largely died out, and although picture postcards continue to bought and sent, this is in smaller numbers. The demise is almost certainly due to instant electronic messaging.