The word 'mail' is a comparatively recent introduction into the English language. While I was growing up in 1940s and 1950s Britain, we 'posted' letters and cards, we didn't 'mail' them, and the postman, not the mailman delivered the 'post' not the 'mail'.

There were several collections a day and they were extremely reliable. What was more, we always knew whether or not we had caught the post at a post box because the there was a small white enamel tablet which stated when the next post would be. It was changed at every collection. You can see this in the first photo. The updated tablet could be slotted in every time that that the door was open for collection. When the door was closed, the bar above prevented anyone unorthorised from tampering with the tablet.

While I was away at university in the 1950s, I could cycle to Exeter St Davids station and post letters and cards home to Cambridge as late as 11.00 at night. The sorting was on the train and everything always arrived the next morning.

Provided that we had the appropriate postage stamp, we posted letters, ready-stamped, in what were variously called post boxes, letter boxes and pillar boxes. For larger items like packages and parcels, we had to go to the post office for the item to be weighed and costed. 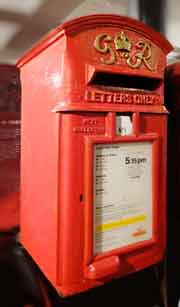 Note the small white tablet, just below the postage slot, which informed when the next collection would be.

Enlargement showing that the monarch was George VI. 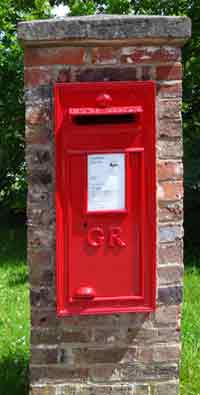 I suppose that 'letter box' and 'post box' were general names and that 'pillar box' was originally for freestanding column-style boxes, but people just seemed to use whatever term came first to mind. The term 'mail box' was never used.

Post boxes were always red and showed the name of the monarch at the time of installation, but as I was never interested in this at the time, I took little notice. In view of the Second World War and the austerity afterwards, I doubt if there were many new post boxes when I was a child. Victorian post boxes were even still in use.

The Georgian post boxes in the last picture has no numeral, so must be from the time of George the Fifth. Before him there had not been a George for 80 years, which was before the establishment of the Penny Post in 1840. Note that the Georgian post box does not have the small white panel for details of collection times, etc.