I particularly like the following poster for the savings certificates because it so clearly illustrates the times - not that that was particularly its intention. 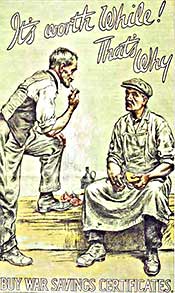 I don't know how successful the posters were for encouraging people to buy the war certificates.

My work on WW1 Officers diaries shows what a hard sell these certificates were to the men in the trenches. There are numerous entries showing how the men were reminded to buy the certificates, the total sold each month, etc and asked to buy more. The Government was not only asking the men to fight but to pay for it as well!

My mother does not mention war bonds, but my understanding is that they were essentially loans to the Government aimed at wealthier people and marketed in terms of patriotism because they took years to mature.

Everyone was encouraged to support the World War One war effort in their own way, and patriotic propaganda and patriotism were woven into every facet of society. 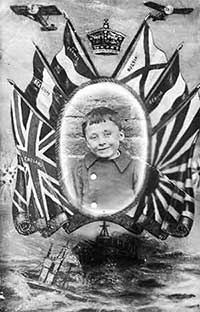 World War One propaganda photograph of a boy framed with the King's crown, the British flag, flags of the allies, fighter planes and a warship.

The photograph shows an example from a typical street photographer.

My younger brother had his photograph taken by a street photographer on the way home from school. (Incidentally, he did not ask my mother's permission, and if he had she would doubtless have refused because money was so tight.)

What is interesting about the photo is how the relatively small photo of my brother is placed in a relatively large frame decorated with images that are clearly intended to whip up pride in what Britain and its allies were doing fighting the war. Note:

These are the powerful and victorious icons of war. Images of life in the trenches and the horrendous casualties are of course absent.

Everyone was encouraged to support the World War One war effort in their own way, and patriotic propaganda were woven into every facet of society.

Old films and photographs of the mud, discomfort, disease, mutilations and death in the trenches on the fighting fronts are well known. 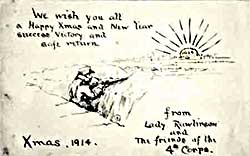 Inspirational Christmas card for the soldiers at the front in 1914

Yet, this Christmas card for the troups, dated 1914, is understandably totally positive. It shows no fighting, only a single soldier in uniform with bright sunshine ahead, the sun with the date of 1915.

We wish you all a happy Xmas and New Year, success, victory and safe return. Xmas 1914. From Lady Rawlinson and Friends of the 4th Corps.