Pipe smoking in its heyday

While I was growing up in the 1940s, pipe smoking was giving way to cigarette smoking, although pipes were still popular with older men.

The best pipes were made of wood and came in a range of shapes and woods. They could last for years. I was told that smokers could detect the change in taste of different woods and that older pipes retained the character of the flavour. 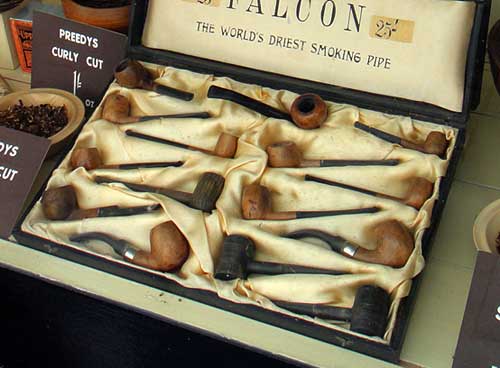 Box of a range of wooden pipes, photographed in the window of a tobacconists shop in the Black Country Museum, said to represent the 1920s.

Cheaper pipes were made of white clay and chipped and broke easily.

Clay pipes, from my mother's effects

The main use of these clay pipes was as playthings for children. It was fun to dip the pipe into a bowl of soapy water, blow into it and watch the bubbles floating out. Not that the bubbles lasted for long, because there was no detergent and soap was a poor substitute.

To accommodate the pipes of all the adults in the family, there were pipe racks in the older houses. These came in a range of lengths and were normally mounted on walls to double as ornaments. The pipe rack in the photo was in my mother's family for many years and was affectionately known by everyone as 'the monks'.

Pipe rack for mounted on a wall, holding a pipe

Pipe cleaners were lengths of stiff but flexible wire covered in a soft fabric. My mother used them as hair curlers.

Smokers had their favourite tobacco brands. One was not like another to them, and a very large range was available. It was normally sold in branded tins, although I understand that it could be bought loose, although one couldn't be sure where that came from - see Peter Johnson's recollection of cigarette butts in cinemas! 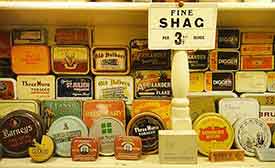 Range of tobacco brands, photographed from the window of a tobacconists shop in the Eastbourne Museum of Shops. (Shag is shredded course tobacco.)