Inside UK cinemas in their heyday

When we first entered a cinema, we found ourselves in a reception area known as a foyer with a cashier's cubicle where we paid our money. Various colourful placards and a small sales stall was also there. The placards changed frequently, so that there was always something new for customers to admire.

The wide open space of a foyer of a luxuriously appointed cinema. 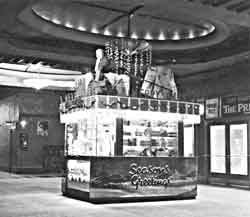 The foyer of the Regal cinema decorated for Christmas, courtesy of David Daniells.

The elegance of the foyer

Our Ritz cinema was almost certainly not unique in being really sumptuous inside, with everywhere except the toilets carpeted, and with superb decor and lighting.

During the showing of Caesar and Cleopatra with Claude Rains and Vivian Leigh in 1945, the whole building was transformed into an Egyptian Temple with props from the film. 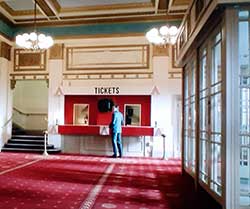 Box office in the elegant foyer.

The balcony, known as the circle

From the foyer there was an elegant curved flight of stairs leading to the balcony - known as the circle - and a set of double doors leading to the one large theatre. (Splitting cinemas up into several smaller theatres was years away.) 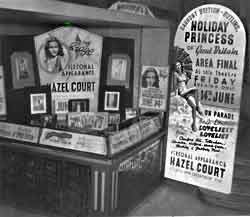 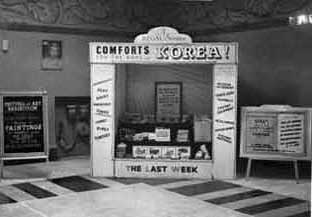 The seats in the main theatre were known as the stalls. I seem to remember three sets of prices. The front stalls were the cheapest because necks cricked looking up at the screen, and the back stalls were the most expensive - a price that courting couples were glad to pay.

The stage and screen

At the front of the theatre was a stage with a large screen and thick curtains at either side which opened and closed to indicate the start and finish of the day's performance.

Behind the curtains, but in front of the screen was a fire curtain which I understood had, by law, to be raised and lowered once every day that the cinema was open. 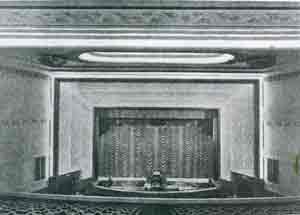 Cinema stage with curtains across the screen. Photo courtesy of David Daniells. 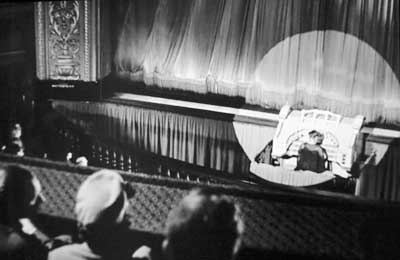 Cinema organ that raised up while no film was showing and sank down during a film. Screenshot from an old film.

I was always fascinated by the colourful and brightly lit organ which played while customers were waiting for the film to begin. I can't remember what the organist played, but I clearly remember how the whole organ was raised up for all to see while the organist was playing, and then how it was slowly lowered to below eye level for the films.

In the same pit as the organ was space for an orchestra. 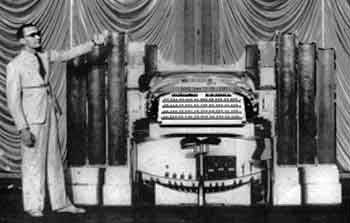 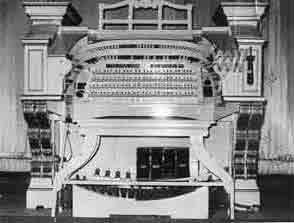 The organ at the Regal cinema showing how it changed over time. The original of the second photo is good enough to enlarge. Tap/click to view the enlargement.

More about the Regal organ

The Regal only ever had one organ - a superb 'Christie' organ with 4 manuals and 14 ranks of pipes. The console started life with a large glass surround, but that was damaged in the 1940s. In 1947 Wurlitzer rebuilt the console and fitted the wooden sides visible in the photo. So the glass sided photo is older than the wooden sided one. The man in the white suit is Phil Park, the organist at the Regal in the 1930s and 40s. My father used to visit the Regal in his teens.


More about cinema organs in general

Cinema organs were pipe organs, similar to those in churches, but designed to sound more like orchestras. Only the organ console (the part the organist sits at) was visible and was often on a lift. The rest of the organ, which was usually a couple of tons or more of pipework and equipment, was situated behind a wall grill or under the stage.

The cinema auditorium and seats

At the cinema which I frequented all the seats were on a floor which sloped upwards towards the back. As I have since seem cinemas with steps rather than a slope, I suppose some cinemas had steps too. The difference in height was necessary in order to be able to see over the heads of people in front, although tall men and women with hats could still obscure. It was pleasantest to sit behind a small child - but not in front of one as they tended to kick and the jolt could be felt through the back of the seat. 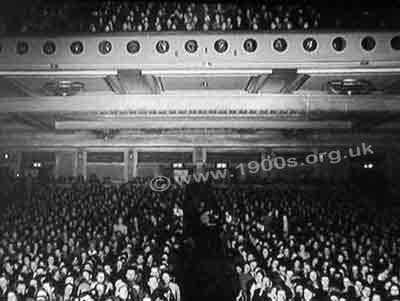 Inside a cinema, showing the large balcony/circle. Screenshot from an old film.

All the seats flipped up for cleaning and to allow people to move along a row.

The seats in the balcony were the most expensive, particularly at the front of the balcony.

The whole space was huge. 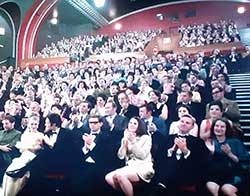 Inside a cinema, showing the large auditorium. Screenshot from an old film.

There were customer lavatories, but I don't think I ever used them. See the following box for the recollections of Desmond Dyer.

The toilets in our Ritz were 'a world apart' for most people. Compared to the outside loos at home and the Spartan and dim public toilets, the Ritz toilets were superb. They were fully tiled and well lit. They had hand basins with hot and cold running water and large mirrors, and there was lots of chrome. Everything was gleaming.


Cleanliness and elegance inside cinemas

At the beginning of the afternoon and the end of the evening, the lights 'went up' but I don't remember them as particularly bright. I can't help wondering how clean the cinemas were.

We knew a lady who was a cleaner at the Regal in Edmonton. She would collect all the cigarette butts that were swept from the floor and take them home. Then she would sit at the kitchen table and with a sharp single edge razor blade would top and tail them, there were no tipped cigarettes in those days.

Then she would slit open the paper and create a pile of tobacco, to which she added a very small amount of fresh tobacco. This she sold to a local newsagents shop which was then sold on as "under the counter rolling mix". Some people called it 'cough mixture'.