Everyone always knew what programme would be showing at the local cinema because there was no shortage of billboards outside the cinema. 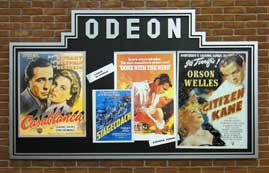 Newsagents showed posters to advertise current films in the local cinemas. They were given complimentary tickets as payment.

Also all the cinemas in the wider locality advertised in the local paper. (There was of course no internet to access.)

The rating certificates for films

The rating of cinema films

B was never a formalised film classification. There was the main film along with the trailers and newsreel and what was termed a second feature.

Early on, children didn't have to be accompanied by an Adult to watch an A rated film. It was originally only an advisory classification.

The H rating was for Horror and was similarly only advisory. The X classification, which replaced the H for wasn't introduced until 1951, well after colour had taken over.

Whether or not children could go to a particular film depended on its rating.

Films were informally rated by perceived quality, with a B rating for the poorer of the two showings. (There always seemed to be a rolling two showings on any one day.) 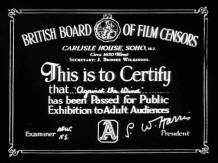 Censor certificate for a film. Tap/click for a larger, legible image.

X rated films were for adults only and were either horror or sexually explicit.

A few films were in colour, which added to their attraction, but most films that I remember where in black and white.

There were three showings of a programme each day, starting in the early afternoon and going on until late evening. The times were advertised. Somewhat surprisingly, though, my mother never seemed to take any notice of the starting times of the films and - judging by how often we had to stand to let newcomers along the rows - she was not alone in this. It was quite normal for us to arrive in the middle of a film and 'see it round' in the next sequence and hence put together the story line afterwards. I suppose that the enjoyment of the event was in seeing people moving around on a large screen, rather than in the plot.

In my experience people always tried to watch the feature film, ie the A rated film, from the beginning, even if they had to arrive in the middle of the other items.

As cinemas were always dark during performances, anyone who arrived while a film was running would be directed to their seats by usherettes with torches. These late arrivals were very disruptive as everyone in their line of seats had to stand and push their seats up to let the newcomers pass - even in the middle of the films.

Cinemas were one of the few places where courting couples could go to sit in the warm and relative seclusion of darkness.

They sat in the back row which had a partition behind it, shielding them from the view of casual observers - although anyone who wanted to see them could easily do so. 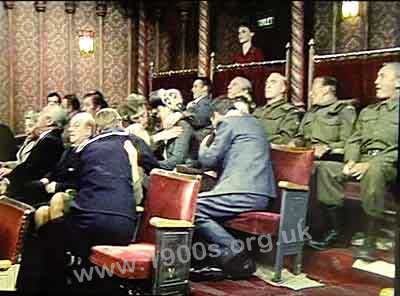 A screen shot from scene in the comedy Dad's Army. Although intended to be amusing, cinemas in the 1940s and 1950s really were like this, although the courting couples would have been younger than the actors.

It was well-known that such couples saw very little of what was being shown.

Because going to the cinema was regarded as a treat, it always seemed that people added to the experience by snacking on something. They could bring sweets and drinks in with them, buy from a bar in the foyer or buy from usherettes who would walk up and down the aisles during intervals with trays of ice creams for sale.

Smoking was quite normal. It would have been considered extremely rude and inconsiderate to object. The air could be thick with smoke. 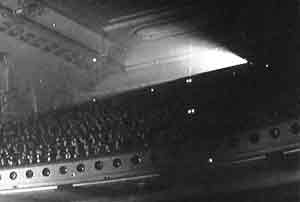 The light from the cinema projector showing up in the smoky air above the audience's heads. Screenshot from an old film.

Incidentally I don't remember any ushers, although I am told that they existed. In my experience they were always women and it never occurred to me that the word 'usherette' was the feminine of 'usher'.

Interruptions to the programme: broken films

The film was stored on large reels and during projection it wound from a full reel to an empty one. Not infrequently the film broke. There was a whirring sound, the screen went messy and then black. After perhaps half a minute, the film started again, the projectionist having spliced the film back together.

The projectionist's task when a film broke

Sometimes the flow of the film was interrupted by a handwritten message superimposed on the screen. Presumably someone had come in from outside needing to contact a customer urgently.

The message usually just asked a particular person to come to Reception. It happened to me the day my father died in 1971, which was the last time I ever went to the Edgware Ritz.

As already mentioned, there were also interruptions from customers arriving mid-film.

A cinema screen message in wartime

One day during WW2 I was sitting in the Regal Cinema in Edmonton when a message come up on the screen stating, "An air raid is in progress. Anybody wishing to leave the cinema can do so". The film continued to run and nobody moved. There was a saying at the time, "If it's got your name on it, it will get you [anyway, wherever you are]"

At the end of the evening programme, the organ played the National Anthem. I am told that something appropriate like the Union Jack or the royal family was shown on the screen at the same time, although I don't remember that. Everyone - well, almost everyone - stood for the National Anthem. Occasionally a few people made a beeline for the exit before the National Anthem started, but everyone else glared at them. I don't suppose they noticed.