Cinemas behind the scenes, mid-20th century

MOST OF THE FOLLOWING IMAGES ENLARGE ON TAP/CLICK

The reels of film

Below is a photo of a reel of film in its metal 'can' as it would arrive at the cinama. Each real would hold about 2000 feet of film which when projected would last about 20 minutes. A feature film was normally about 90 minutes long, so there were usually 5 reels to each film. The audience would see it as one continuous action. 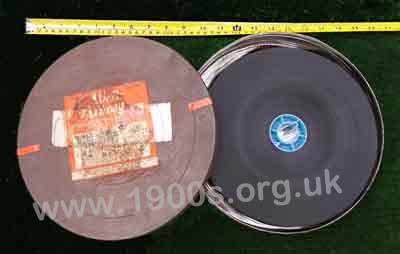 Can of film. The enlargement shows its size against a ruler

Delivery and collections of films

Films arrived at cinemas by van in transit cases, normally on either a Wednesday or a Saturday. They were wound on bobbins in flat round tins.

Films ran from Sunday to the following Saturday. So after the last performance on Saturday nights, the films would be rewound onto their bobbins, replaced in their tins and put into transit cases. Then they would be put in a room at the back of the cinema where they would be collected by film transport during the night.

Cinema projectors were large complex machines, which had to project at a distance onto a very large screen. So they were very different from the film projectors owned by individuals and small businesses.

The projection room was behind the audience, above the balcony. 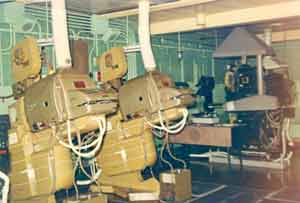 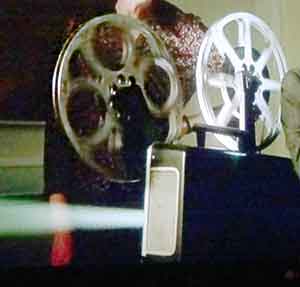 For comparison: the type of film projector owned by companies and better-off families

Two projectors were used for showing a film. It was the task of a skilled projectionis to synchronise what was seen towards the end of one reel with the start of the next reel.

The task of loading a reel of film onto a projector was called lacing. The projectionist would 'lace up' the first and second reel of film on projectors one and two. The first projector was then started to show the first reel. When the end of the first reel was approaching the second projector was started but not show to the audience. The projectionist would compare what was showing from the two projectors and adjust the second projector's speed to get the two projectors synchronised. At an appropriate time the projectionis would then switch what was being seen by the audience from one projector to the other. The switching of one projector to the other would appear seamless to the audience. This process was repeated for switching between reels until the full film had been shown.

At the changeover interval between two feature films, there was a short time when various adverts, trailers and special interest short films was shown. For ease these were all spliced together for showing and then spit up again for sending back to the supplier.

There was little time for projectionists to sit back, although this did improve with later developments for loading the reels of film.

The 20-minute reel was standard for many years because the burning time of the carbon arcs in the projectors was limited.

At the Regal, there was a staff of five projectionists: Chief, Second, Third, Fourth and a trainee. The Chief and Second both had to be over 21 so that if one was off the other would be on duty. At any one time there were three projectionists on duty. Two were working while one had a break. We used to split the day into shifts, but when we were short staffed we officially did not get a break. If one or the other had a holiday we would have a relief projectionist - some of whom we welcomed, although others had their own ideas of how to run the shows and could cause problems!.

For announcements on stage and for shows and pantomimes, there was a spotlight in the projection room. 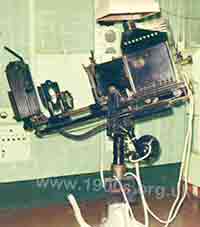 The spotlight in the Regal cinema, mid-20th century

There was a switchboard for controlling the stage lighting and other electrics. 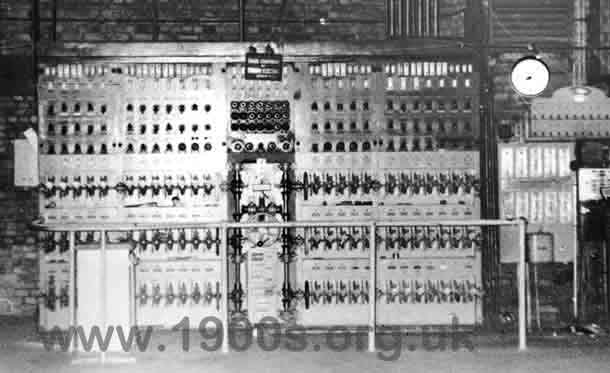 The stage switchboard in the Regal cinema, mid 20th century

in all the cinemas where I worked, there was no automation. Although all the opening and closing the curtains and raising and lowering of the house lights were electrically driven, we had to make sure that we pressed the buttons at the right time. The aim was not to draw the audience's attention to the fact that it was not all done 'by magic'. Many of us were proud of our showmanship.

There were quite a number of rooms that the public never saw. Apart from the projection room and the areas behind and under the stage, there was a battery room (needed because all the exit signs and exit passages had to have mains and battery lights); a rectifier room for power to the projector, arc lamps; and electrical intake rooms. The staff rooms included staff canteen which served hot and cold food, staff loos and a staff room.

The Regal was not only a cinema; it doubled as a theatre for shows and pantomimes, which not all cinemas did. It therefore also had a restaurant and dressing rooms for the actors. It was enormous. In fact it was one of the five mammoth cinemas built in Middlesex and was said to occupy the largest site of any cinema in the world.

By David Daniells, former projectionist at the Regal cinema in Edmonton, north London.