Our Saturday Morning Pictures in Edgware, north London, where I grew up, was hugely popular and relatively cheap. The crush of hundreds of children trying to get out at the end of the morning was one of the many witnesses to its success. One Saturday morning, I lifted my feet off the ground, just to see how far I would be carried by the sheer force of everyone pressing around me. It was quite a distance!

Saturday morning pictures must have stopped during the war, as implied by Alec Fry's experience - see below. Before the war it was very active as shown by my mother's experience in the early 1900s.

I remember when our Saturday morning cinema clubs started up after the Second World War. It must have been not long after I returned from being an evacuee in Wales in 1945, probably after VE Day the following year. It was the Odeon in either Beckenham or Penge, I can't remember which as we lived between the two. The cinema put up posters outside in advance and the news spread like wildfire. On the first day the queue stretched right down the road. The cost of 6d took most of my 8d pocket money but it was worth every penny. My favourite films starred Roy Rogers and Gene Autrey, though I especially remember an old guy called Gabby Hayes. The cheering and booing were part of the fun as they fought the red indians.

Our local cinema in Edgware was the Ritz, which was part of the ABC group. We children who patronised the Saturday Morning Pictures were encouraged to be 'members', known as the ABC Minors, and we were given a special badge. We even had our own song which we sang at the beginning of the shows. The National Anthem was played at the end, for which everyone stood.

First the queue; then the orderly rush into the 'theatre' with its plush seats and impressive, decorated facades. You could feel the growing anticipation: a virtually full Ritz cinema (not the balcony) with hundreds of excited, expectant school kids, all waiting for the performance to begin.

Then the manager addressed us by speaking from the warmly lit stage. Next the lights dimmed, the screen lit-up, the music started, and all of us began singing - or perhaps shouting would be the better word - the ABC Minors song at the top of our voices!

I seem to remember that the cost of the Saturday Morning Pictures was a tanner - ie sixpence or 6 old pennies.

How we got free entrance

I was a member of the ABC minors at the Ritz Edgware from 1946. I was made a Monitor which enabled me to gain free entrance, thus saving 6d for extra sweets. If it was your birthday you were invited to join the manager on the stage and be cheered by the audience. The manager's name was Mr Dilley, I believe.

Some children always got in free via the fire exits.

The song was sung to the sound of a band playing the marching music 'Blaze Away'. The words were as follows (or very similar).

We are the boys and girls well known as
Minors of the ABC
And every Saturday all line up
To see the films we like, and shout aloud with glee
We like to laugh and have a singsong
Such a happy crowd are we.
We're all pals together.
We're minors of the A-B-C.
The final line was shouted at full blast - especially the A-B-C.


I think we sung the verse twice. There weren't any problems remembering the words or keeping time because the text was shown on the screen and a little 'ball' bounced along above the words in time with the music. I have a feeling that, in the beginning, the text and ball must have been white on a black background, but I think they ended up as yellow on a green or blue background.

I used to go to Saturday Morning Pictures at the New Bohemia cinema near Finchley Central. One vivid memory from there was commemorating the death in 1949 of Tommy Handley, the famous radio and cinema comedian. Several hundred youngsters stood respectfully for a full two minute silence. Today's generation would find it hard to believe!

From the viewpoint of the cinema staff

At the Regal in Edmonton, Saturday morning pictures could be really hectic as we had about 1000 children from about 5 years to 16 years, but it was great fun. At times, though, they used to run riot, although most of the time they were quite well behaved.

The Saturday Morning Pictures at other cinemas

ABC was not the only cinema chain to show Saturday Morning Pictures for children.

John Barton
As remembered from the Wandsworth Palace cinema

At the Saturday Morning Pictures that I went to in the mid 1940s (the Regal Handsworth in Birmingham), we sang another song to the melody of Lilli Marlene. The lyric, as I recall was:

Waiting at the crossing just outside
The policeman's there to be my guide
for I'm a Regal minor
a regal minor am I...

Can anyone remember the rest of the words?

I wonder how many other cinemas went independently song-wise as mine did. Any feedback?

In the 1950s my mates and I used to go to Saturday Morning Pictures at the Century Cinema in Stratford in east London, now unfortunately a block of flats.

From memory, the first line of our song was:

We are the Century Rangers little girls and Boys. I can’t remember anymore.

The cinema was packed every Saturday. Life was simple in those days for us.

I particularly remember the smell of bubble gum and girls' cheap scent at Saturday Morning Pictures at the Odeon in Muswell Hill.

The programmes consisted of cartoons, regular films and serials to encouraged us to go along on the following Saturday - not that we needed much encouragement. It didn't really matter what was shown anyway, as moving pictures with sound were fascinating and there was only this one place where we could see them.

As I recall, a typical ABC Minors programme was made up of two sections: First a few cartoons and/or short funny films (including silent ones). Then a film, or maybe two shorter films.

There was usually a serial (one I remember was The Masked Rider). I also remember Will Hay in The Goose Steps Out, where he ties trainee German spies in verbal knots trying to pronounce "the road to Slough is rough".

In addition to the singing and cartoons, at Loughton in Essex there were competitions and exhibitions of the latest fads, such as yo-yo and Hula Hoop demonstrations.

I regularly attended Saturday Morning Pictures at the Odeon in Muswell Hill. It showed cartoons, Tarzan serials and main pictures, but it was the main pictures that interested me most. I particulalry remember the cowboys and Indians and the Cavalry and Indians films in which the Indians were always the baddies. I was probably the ONLY child in the audience who was VERY pro Indian !

I was born in 1954 and from the age of 9 was a regular attendee at my local Ritz ABC Minors Saturday Morning Pictures. This was in my home town of Luton.

When I was about 14, which would have been in the late 1960s, my mate who was about 18 months older than me was promoted from monitor to head monitor, and he got me a job as a monitor. We were the top dogs and after being briefed on my duties I set to work. It was a bit un-nerving to begin with but soon I was in my stride.

One of my tasks was to wait until the show started, then stand in the exit by the toilets because this was when some of the kids would visit the toilet then open the adjacent fire exit where loads of other kids would pile in free and slowly mingle into the crowds. 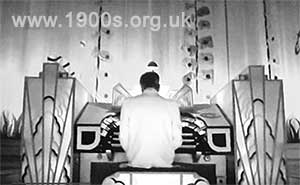 The organ and organist rising up from the pit

All this was under my watchful eye! My task was to scan the hoards and if I spotted someone who had appeared on the stage the previous week to eject them from the stage.

When the head monitor left I was promoted to head monitor, and suddenly I ran the show. I had seven monitors under me, to hand on my wealth of experience to.

Programmes into the 1960s

At the ABC Minors Club in North End Road, Fulham in the late 1950s/early 1960s, we watched Merrie Melodies and the usual Bugs Bunny, Daffy Duck, Porky Pig. Most serials were black and white and American including a rather tubby Batman and aged superman before the days of Lycra. I enjoyed William Tell and the villain Gestler. Batman scared me. The enemy was played by J. Carrol Nash and the subject matter involved a mine and mind control using a sprung metal device worn on the head. We had The Three Stooges and a couple of series featuring a gang of young American individuals who had scary adventures. I believe Mickey Rooney was a child actor in them.