Children's Saturday cinema in the era of silent films

Costs of going to the Saturday morning pictures

We paid a penny each to see the programme and then came out with an orange or a bag of sweets.

The films were the silent ones and the pianist would give the effects by playing music to add to the excitement of what was being shown. Pianists invariably did their job well.

There was always a serial running over several weeks. The Perils of Pauline come to mind. Every episode ended on a dramatic climax which kept us children coming back next week for more. The actress who featured a lot in the serials was Pearl White. The villain of the piece would capture her, tie her up and put her somewhere terrifying like on the railway line of an oncoming train. We took these films most seriously. When gringo* was about to attack from behind, we children would shout out, "Look behind you" - as if she could hear us! - and boo. Harold Lloyd was the actor for thrills. How we would scream when he was about to fall from a five storey building! Children of today would not turn a hair at such things.

* Gringo seems to have been a term for a bad American in a film. 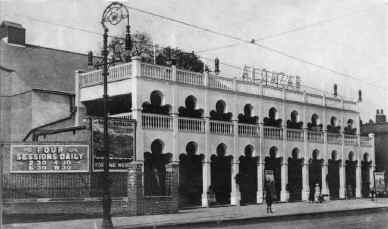 My mother did not say which Picture House she went to in Edmonton. According to Terence Gallacher who has made a study of old theatres, it was almost certainly this one, the Alcazar which was destroyed in World War Two.

I think I can remember the inside of the Alcazar cinema, but as I was only four years old when it bombed in 1940, I have to question my memory. However the Alcazar was a really memorable place for a young child. What I seem to remember was a large half round display counter just inside. 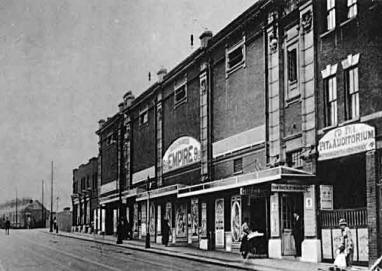 Another possibility could have been the Empire which was primarily a music hall venue.

Another cinema was in Angel Road and called the Hippodrome. It started life as a theatre and was then converted to cinema. It was still a cinema when it closed just after the Second World War. Then it was used as a billiard hall after which it lay derelict for many years. The site is now a car park. An interesting story is that at one time there were no toilets inside and customers had to go out of the building and avail themselves of the local householders nearby, probably for a fee.