Early in the 20th century, the lengths of film reels was limited by the running time of the carbon arc lamps, as excessive use made them burn out.

However, when the carbon arc lamps were replaced with xenon lamps it was possible to get a longer running time and 5000 foot spools were introduced. Two or three shorter reels could be spliced together so that there was only one changeover between projectors during a film.

Further developments allowed a whole film to be joined together and shown on one projector. They allowed the film, once started, to be left to run through to the end - hopefully without any breaks! - and to shut down automatically without anyone being in the projection room.

The curtains, house lights up and music could also be started and controlled automatically. 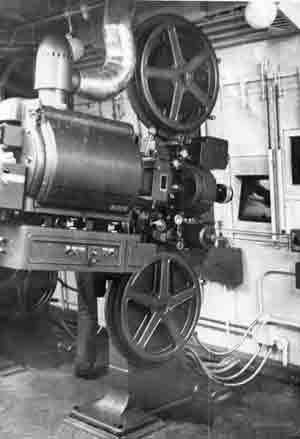 A 'tower' was two-sided. It had one feature film loaded onto the top spool which was laced through the projector and then onto the bottom take-up spool. The other film was similarly loaded onto the other side of the tower. At the end of the first feature, the tower was turned round and the second film shown while the first film was being rewound. 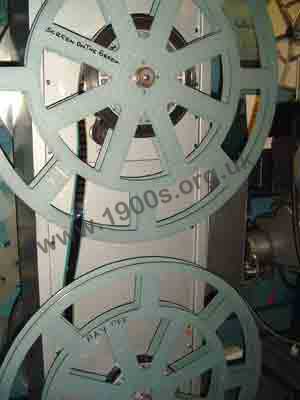 Film on one side of a tower waiting to be laced up into the projector.

As the photo shows, a 'cakestand' had flat plates. The film was run onto the plates as one length, then threaded through the projector via rollers to guide it.

The idea of the cakestands - or platters as the Americans called them - was that a whole feature film of 5-6 reels could be put onto a flat plate. Then it would be fed from the centre of the large reel through a module which regulated the speed. The plate rotated to stop the film coming off too fast or slowly. As the film was run through the projector, it was then taken up on one of the other two plates so that the beginning of the film was again in the middle. So then the module was moved to this plate so the start of the film was in the middle and was then ready to be run again. 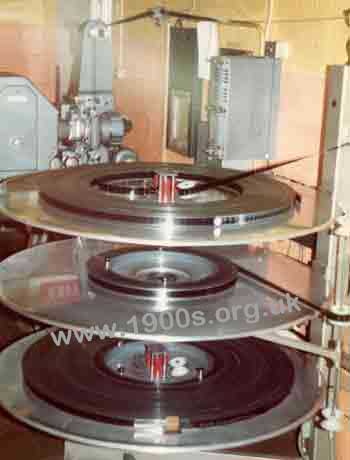 Film running from a cakestand/platter

In the picture the film is running from the top plate through the projector and feeding onto the middle plate. The film on the bottom plate is the second feature so when the main feature had finished, the top plate would be empty. So the module could be plugged into the centre of that plate and that film would be run to the top plate which would now be empty. The module is the little thing in the middle of the top and bottom plates. There were two modules just to make life easy.


By David Daniells
former projectionist at the Regal cinema in Edmonton, north London.