When I was growing up in the 1940s and 50s, there were no televisions. If we wanted news with moving pictures, it meant a visit to the local cinema.

A typical cinema programme consisted of two films, trailers for future films and a newsreel. Presumably the newsreel was so called because it was on a reel of film. This news always seemed to me to be put together by Pathe, whose emblem was a crowing cockerel with full sound effects. However, I have since learnt that Pathe was merely the newsreel for my local Ritz cinema and that there were other newsreels - see below. 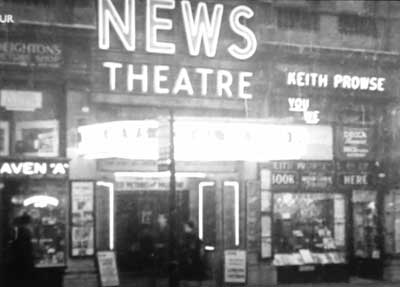 In wartime, everyone relied on the newsreels to keep up visually with what was happening, even though a new edition only came out only at weekly intervals, changing with the programme.

The newsreel was dependent on the cinema circuit, and was not restricted to Pathe. It would change with the program each week.

The Regal Cinema had British Gaumont News and the Empire Cinema had Pathe News.

Our local newsreel where I lived in Wales was Movietone News.

There were also 'Newsreel Cinemas' or 'Newsreel Theatres', the main, but not exclusive, purpose of which was to show newsreel films continuously throughout the daytime period. One problem with newsreel cinemas, especially during winter, was that they were attractive to vagrants and others who just wanted somewhere to sit and keep warm - if they could beg the money to get in.


Why newsreels were so popular

Although all the newsreels were in black and white, they were at least moving images compared to newspapers. So people often went to the pictures just to see the newsreel and then leave. They went for a boxing match, or a football match or some big battle that our troops had been involved in.

The horrors of wartime newsreels

The Fall of Nanking on cinema newsreel

There was one newsreel that I can remember to this day, even though I must have been less than five years old at the time. It was in a Regal Cinema. To my horror I watched as babies were thrown into the air and then caught on the spikes of soldiers' bayonets; as women were buried alive; and thousands of dead bodies were lying in the streets. It was the Fall of Nanking, when the Japanese captured Nanking in China. If you can get this footage from the Gaumont archives, you can see for yourself. It is history in the raw.

Belsen, Dachau and other concentration camps on cinema newsreels

I remember being told that Movietone News newsreel showed pictures of what the Allied soldiers had discovered at Belsen, Dachau and other concentration camps. The sights were too awful to bear and many people tried to leave the cinema. There were cases where they were prevented from leaving by soldiers who said that they needed to look at the sort of people we had been fighting for over the last six years. The stories of the treatment of prisoners of war held by the Japanese only came to light with the Japanese defeat some months later.