A guest contribution by Peter Johnson

At the outset of World War Two, many thousands of air raid shelters were hastily built for use on a communal basis. They were sited on waste land, in parks and in the middle of wide public roads. They were strong enough to provide protection from the blasts of exploding bombs which was important as more people died from bomb blast than from direct hits. Nevertherless many people were killed in direct hits on these shelters.

There were two main types of these hastily built public shelter.

One type of shelter was the above ground type built of ordinary house bricks. These were long rectangular structures with a concrete roof, and inside were rows of wooden bunk beds, some four beds in height. All had flat metal strips that acted as springs. I cannot remember any form of heating in the winter apart from the body heat we all generated.

The second type of shelter that I remember was the underground type which was usually built in open country and parks. The ones we used in Jubilee Park, Edmonton were very large concrete tubes that had been placed in vast trenches cut into the ground and then covered over, leaving just a slight bump in on the surface. We entered by going down some steps and through a thick metal door. There were bunk beds and ventilation was by tubes like periscopes sticking above the surface.

How the public could identify a public shelter

Public shelters were all marked with a large black sign some 4 feet by 2 feet painted matt black with a large white S so that they could show up in the blackout. They were enamelled to protect them from the weather.

Everybody got to know where the local public shelters were. So when the warning siren sounded while they were outside, they could make a mad dash to get under cover.

Finding a public air raid shelter while on a bus

Bus drivers too always knew the nearest shelters along their routes. When the siren sounded, they would drive their bus to the nearest shelter and all the passengers, the driver and the conductor would get out and squeeze into what was already an overcrowded shelter.

Finding a public air raid shelter while on a train

Being a Londoner I have no experience of being on a train in an air raid. The London Underground was of course safe while trains were underground in the central area of the city. Overground would have been in more rural areas which were less likely to be hit. If you have more information, please contact the webmaster.

Finding a public air raid shelter in a strange locality

In a strange place, there was invariably someone to ask where the nearest public shelter was. In fact one only had to follow the crowd. There was always the large S to show when one had arrived.

As a last resort one was supposed to knock on the door of the nearest house and ask to go into its shelter.

The desperate rush to a public shelter

In early 1940, bombing started in earnest in Leicester where my family lived. On one horrendous night we had the full force of the German bombing onslaught, probably trying to hit the railway. 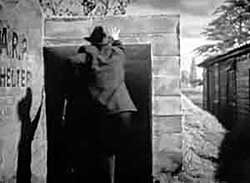 The dash for an air raid shelter, screen shot from an old film

My mother took one look at what was happening and decided that our home shelter was not adequate. She bundled me quickly into a pushchair and we all ran the half mile down Wyvern Avenue to the large shelter which had been built under the playground of the school. As we ran we could hear the bombs whistling down and could see the flames from the burning buildings. The whole sky was lit up. Young as I was, that image has never left me.

The shelters I remember had a bucket for a WC fitted with a seat, usually in a corner. Modesty was protected by a cloth curtain. My experience was that during an air raid we sat there in fear as the bombs came screaming down and the last thing we thought of was going to the toilet.

Allocations of beds inside public shelters

People who lived in flats or houses with no back garden for an Anderson shelter or no space for a Morrison shelter were usually allocated a regular bunk in the nearest public shelter. So when the siren went off to warn of an impending air raid they grabbed their bundle of clothes, some blankets etc, and made a run for the public shelter.

During an air raid when the doors were shut, the air inside these shelters became very smelly. A combination of people smoking, body odour, the toilets, and the rank condensation all added with fear of dying stays with you for ever.

After an air raid, ie after the 'all-clear' sounded we would go outside to breath in some fresh air even if it was laced with the fumes of burning buildings.

We were all in the same boat; we were all friends in adversity. Somebody would bring a large tea pot, the mug was passed round. Sometimes we had a sing song. Life went on.

Community spirit grew as the war dragged on because we all got to share a public space, and there was always somebody with an accordion or a mouth organ. They would start playing and we would all join in singing the popular songs of the day. As a bomb came whistling down we would all stop singing. Then if it fell somewhere else we would all start singing again.

During the day, volunteers would empty the buckets and sweep out the shelters. Everybody 'mucked in'.

Public shelters were necessarily always open to the public whether there was an air raid or not, and they were out of wind and rain. This made them ideal venue for courting couples.

Within a couple of years of the war ending the brick shelters were knocked down, often by German prisoners of war. The ones underground were filled in and covered over.

*Photographed by the webmaster in Swansea Bay Museum