I was born three months before the start of the Second World War, and I lived in north London. The war ended in 1945, so most of my recollections of air raids are from before I went to school. However I do remember one air raid while I was at my first school, Edgware Primary School.

When the siren went, we all had to troop out into a field at the back of the school and be led what seemed quite a long way to climb down into an underground shelter. As we went, we had to sing "Ten green bottles" presumably to help us move quickly in step with the beat. Nevertheless, if a bomb had dropped, we would never have reached the shelter in time. 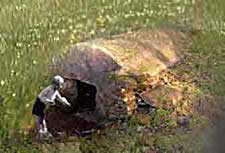 The WW2 school shelter used by my class. This picture is a computerised composite of several original photographs, created to match my recollections.

There were benches to sit on but they were not particularly inviting because the dampness and mud seemed to have got to them too. My recollection is that it was quite dark down there, but there must have been some light although I don't remember what. Fortunately the air raid wasn't a long one and we were let out quickly.

In retrospect, I realize that the shelter was of the underground type described on the page about underground public shelters, but I knew nothing of that at the time. I also realize that it was only because the school was relatively new with an open field at the back that it was possible to build these underground school shelters. Some schools had to use alternatives - see the end of this page.

There were a number of school shelters, probably one for each class. Ours wasn't particularly crowded. What stuck in my mind was how wet, muddy and dark it was inside because it was some way below ground.

There were probably two, maybe three, exits to the shelters at the back of the school. One was somewhere near the outside door at the headmaster's office and at least one more was further down in the direction of Burnt Oak. The shelter I remember consisted of a sloping shaft with concrete walls and steps, leading down to the shelter room. The room was pretty long, but my childish mind was too immature to think about length or to judge it. I think there was a WC down there.

We children sat in two parallel rows facing each other. With our backs to a wall, we all had our heads turned to one side, looking towards the dimly lit teacher.

I only ever remember going into the shelter during air-raids - never for practice.


Alternatives to underground shelters at school

Blast walls - the next best thing to shelters

I don't think there were any air raid shelters at my school in Edmonton. There were, though, very thick brick blast walls specially built in front of every entrance. During one air raid, I hid under my desk and when the bomb went off all the pictures on the wall fell and came crashing down.

Schools were quite innovative about how best to protect children during air raids where there was no space to build underground shelters or blast walls - see the examples on the Makeshift Shelters page.

In the summer of 2005 the edge of what turned out to be the buried remains of a wartime air-raid shelter was found on a raised area of turf in the playing field of what was Edgware Primary School. Archaeological excavation revealed a staircase down, cast from a single piece of concrete leading to a shelter almost 15m long. Two of the visible walls were built from preformed panels of reinforced concrete approximately 0.45 m wide and 2 m high; the partition to the right of the entrance was a half-brick wall. At the far end there was a metal ladder leading up to an emergency exit, sealed with a concrete plug. There was a toilet cubicle at each end of the shelter, but the chemical toilets and the benches had been removed. Fragments of electrical wiring remained, including the brackets for the distribution panel and several Bakelite covers.

After the war, the wood, glass and electrical fittings were stripped out and sold for scrap. According to records dated September 1946, thirteen air-raid shelters at the school were sealed up with reinforced concrete. These thirteen were shared between what were Edgware Primary School and the adjacent Edgware Secondary Modern School.