Anderson shelters were WW2 bomb shelters primarily for back gardens. They came in a range of sizes suitable for medium to large families.

Early in WW2, when London was bombed nightly by the Luftwaffe, there was a shortage of bomb shelters for people to take cover. What was needed was a shelter that could be mass produced for larger families that could be put up where there was space in their gardens. (Morrison shelters were for small numbers of people and could be fitted inside homes.)

An engineer named William Patterson designed a suitable shelter which became known as the Anderson Shelter after Sir John Anderson who was designated by the Prime Minister Neville Chamberlain to take charge of 'Air Raid Precautions', later known as the ARP.

Around 3 million Anderson shelters were distributed.

For other shelters see the above menu. See also blitz recollections and my own family's story of their house destroyed in the blitz.

What an Anderson shelter was

An Anderson shelter was essentially a reinforced dug-out for back gardens. The roof and sides were sheets of corrugated iron bent into an inverted U and bolted together with the soil from the dug-out on top. The door and end wall were also corrugated iron.

Mockups of Anderson shelters in museums and WW2 re-enactments

The word 'dugout' is crucially important. Museums and WW2 WW2 re-enactments invariably show Anderson shelters sitting on the floor - which is understandable because floors can't be dug into at whim. Some even don't show the thick insulating earth or its mock-up on top. Such bare corrugated iron would have given no protection at all!

Kits designed for up to six people could be bought, but - as I was told later - they were given away free by the Government to poorer families with enough outdoor space to accommodate them.

How kits for Anderson shelters were constructed and installed

Once the kit for our Anderson shelter was delivered, we faced the problem of assembling it. First my father, helped by my uncle, dug a rectangular hole in our back garden, supposed to be about four feet deep. I can't remember its length and width. That depended on the type of Anderson shelter that we were given, but it had to be big enough for makeshift beds, benches and a tiny table. 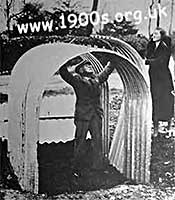 Four feet is a lot of digging and most of the families I knew didn’t go down that far. Perhaps that was a good thing, provided they didn’t get hit! because the deepest shelters were the dampest and muddiest.

Once the hole was dug my father and uncle had to fix the heavy corrugated sheets in arcs from one side to the other and then place uprights at the back and front, with a small entrance/exit at one end. This done, gaps were sealed with bitumen and the floor was concreted. Then they had to put sandbags or earth on top against bomb blast. Most families used earth from the hole that they had dug.

Our Anderson shelter was installed in the back garden, beyond the garden shed, about three feet of its height being underground and the top half above ground level, covered by the spoil of the excavation. It was made of 'Dolphin Brand' corrugated iron (showing many blue stippled trademarks of dolphins) and with the joints sealed with black bitumen.

The floor was of concrete with a sump to collect leakage and condensation. Along one side were two bunk beds and along the other was a single bunk with storage underneath. My father ran an electricity supply from the shed and we had a flat electric fire which would also boil a kettle, a mains driven nightlight for night-time use and a bright bulb for daytime. There was a sealed biscuit tin of emergency supplies (which fortunately were never needed) and some earthenware bottles of water. The shelter entrance was via a pair of two inch thick wooden doors and a set of wooden steps down. The doors had ventilation holes in them.


The dampness inside an Anderson shelter

Anderson shelters were always running with condensation after people had been in them a while and there was always water on the floor. My father made a wooden rack to keep our feet dry. He also installed a hand water pump so the water could be removed.


In some areas it doesn't matter what you do to try to make an Anderson watertight, it just carries on taking in water, like a trench.

The confined space inside an Anderson shelter

Inside our Anderson shelter, we had four bunk beds, a bucket with a seat as a chamber pot and another bucket for drinking water. It was pretty cramped.


There were also candles or oil lamps. The night-light candles had to have a clay flower pot over them to reduce the light because of the blackout. The candles would burn up the oxygen in the air and you got sleepy.


The cat came too

By 1943 I had a baby brother and we had a cat as a pet. Ludicrous as it may seem now, an evening ritual developed. When the first warning siren of the night sounded - as it did on most nights, usually between seven and nine o'clock - we would all make our way outside to our Anderson shelter. My mother would carry baby Richard, my father would carry Jimmy the cat, and I would go with them on foot in my dressing gown and slippers. We would settle down in the shelter for the night, smelling the bitumen and listening to the sounds around us.

The hen came too

The hen came too! When the siren sounded, my grandmother's prize 'Rhode Island Red' hen was hastily dumped into a cardboard box to accompany us outside to the Anderson shelter. The cock, on the other hand, a vicious bad-tempered creature which I hated with a passion, was left outside to face Hitler's bombs. I used to pray that my tormentor might 'cop it'!

The noise inside an Anderson shelter

The noise of crashing buildings

I lived in Newport during the war and the bombing there was relentless because the Germans were trying to put the docks out of action. We spent every night outside in the Anderson shelter. Young as I was, I shall never forget the noise of the bombs as they came down. It was faint in the beginning, gradually getting louder and finally becoming a scream. As the scream got louder, all conversation stopped. We sat in deathly silence, just waiting, as there was no way of knowing whether or not the bomb would miss us. As it landed, we heard and sometimes felt the explosion. We had no idea what we were going to see when we emerged the next morning.


The noise of the doodle bugs

I well remember the 'doodle bugs' which I hated, as I knew that when the engine stopped they would fall. I was so scared waiting and listening to see if they would land on our house.

A baby is born in an Anderson shelter

My sister Margaret Anderson Johnson was born in our Anderson shelter during the blitz, hence her Anderson middle name. This was at 153 Bulwer Road, Edmonton N.18. My mother went into labour. So my brother Eric, sister Betty and I went to stay in next door's shelter for the night. Next morning we had a new baby sister. She was in all the newspapers at the time, being christened "The Blitz Baby". We had a midwife, a Queens Nurse for the birth, and soap and water, carbolic and flea powder to try and keep the shelter tidy and smelling nice.

Every morning, someone had to empty the bucket or chamber pot, renew the candles or refill the lamps and dry off damp bedding.

It was my sister and my job to pump the water out. We had to do it once a week with a Paragon hand pump.

My grandfather in his family's Anderson shelter in World War II

As Anderson shelters were installed in back gardens, there was not always enough time for everyone to get to get to one once the warning had sounded and before an air raid began. My understanding of this is etched deeply in my mind because it was what happened to my grandparents and their grown-up family.

It was early evening; they were preparing for supper, so had not yet settled into the shelter for the night.

Then the warnng siren sounded. The result was that my grandmother was killed instantly and several of my aunts and uncles were hospitalised. My aunt was maimed for life. The house was a write-off.

The story of that Edmonton bombing was told to me in graphic detail over and over again as I grew up. The linked page describes it in my mother's words.

*Photographed by the webmaster in Lincolnsfields Childrens Centre, Bushey