Individuals and local authorities were quick to recognise existing spaces that would be safer - if not actually safe - while better air raid shelters were being prepared. In fact, some such spaces were so safe that they remained in operation for the duration of the war. What particularly comes to mind is the London Underground which is an example of a ready-made opportunity which was only available locally. Caves in hillsides are another such example.

Under the stairs at home

While waiting for their Morrisons and Anderson kits to arrive, people were advised to use the space under their stairs. The stairs were regarded as probably strong enough to stay roughly in position in anything other than a direct hit, even if everything else collapsed around them. They would of course have to be dug out, but I suspect that this wasn't mentioned.

I well remember the excitement of taking shelter under the stairs. I sat in this small space with mother, father and younger brother who was then only a baby. Of course I didn't realise the huge dangers at the time, and was almost disappointed when the all-clear sounded, allowing us all to return to bed. Later our Morrison shelter arrived.

On several occasions we school children were ordered to leave the dinner tables because the air raid siren was sounding. We filed down to the basement where we occupied the time singing songs. Then, when the 'all clear' sounded, we returned to our dinner tables where we sat down again to the same plates of dinner, now cold. We had to eat it! No potato crisps or chocolate bars as alternatives!

If a bomb had dropped on us, we would probably have had to be dug out of the rubble of the floors above, but we would have been alive.

Our first local air raid shelters were the cellars at the local pub which were set up with beds and bunks for anyone's use. (This was The Cambridge Pub in Edmonton.)

I understand that some rooms in offices and schools were quietly reinforced as early as 1938 in anticipation of what was recognised as coming.

At Dalston County Girls Grammar School in Hackney in 1943, my class was designated the ground floor cloakroom as an air raid shelter. This was because it had been reinforced with concrete block walls within the inner walls and over the windows. The ceiling too was reinforced.

This makeshift shelter was not at all suitable as a classroom. Being a cloakroom there were several two or three double sided rows of racks for hanging coats, underneath which were wire boxes for shoes and Wellingtons. On top of these wire boxes were hard and narrow wooden benches which were only intended for brief use such as for sitting changing shoes, etc. So sitting on them for hours at a time was extremely uncomfortable. Also it was pretty crowded in there when three classes of 30 girls crowded in and seated themselves, not to mention the discomfort of coats, jackets, bags and gas masks dangling over our heads while we were trying to juggle exercise books etc. The lighting was also very poor. I recall a science lesson on magnetism utilising iron filings on a sheet of paper and a magnet; most of my iron filings ended up on the floor. So classes were not all that successful although some of the older girls studied for their finals in similar shelters in the gym changing room.

A number of lessons took place in these shelters while we waited for the All Clear to sound, and if it hadn't sounded by home time we had to wait until it did, which was not popular.

Air raid experiences while in this shelter - fear but no panic

I particularly remember shortly after lunch on the afternoon of Monday 3 July 1944. The siren sounded and we all trooped to our designated shelters where classes continued for a while. Work stopped when we heard the sound of a V1 approaching. It was flying very low and as it drew nearer the noise increased until it sounded as loud as if one were standing up close to a huge engine running at full speed. The noise was deafening and I am sure many of the girls in the shelter thought, like me, that their last moment had come. I had never heard one quite so loud before, with the noise completely surrounding us, growling and then, even worse, hiccupping as if it was about to stall. We all knew what that meant. If the engines stopped, the bomb would drop straight down and explode and we were underneath! Everyone tensed not knowing how close it would be when it fell and probably willing it to keep on spluttering.

Suddenly the engine cut out and we all held our breath. Two seconds later came a tremendous explosion which caused the whole building to shake. We all jumped at the sound knowing how close it had been and how close we had been to death. It must have just skimmed the tops of the nearby houses and passed directly overhead. We all sighed with relief and with wildly beating hearts got on with our school work. No panic. No hysteria. No fuss.

Those sheltering with me in the cloakroom that day were, like me, 12 years old. We were a school of over 300 girls and women teachers and although we were all terrified no one panicked. We were all sent home early once the All Clear sounded but some of us had to detour as our usual route had been cordoned off due to the explosion which had demolished several houses.

Like caves, castle battlements are another example of what would only be available in specific relatively few areas. Corridors and rooms under battlements were taken over as public air raid shelters.

The following photos were taken in Cardiff Castle which is particularly impressive as some of the items from the time have been kept in place as showpieces of what World War Two air raid shelters in Britain were like. 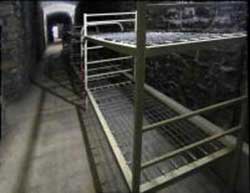 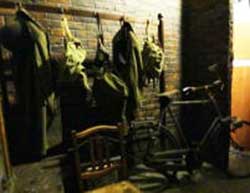 A storage room showing coats and a bicycle. 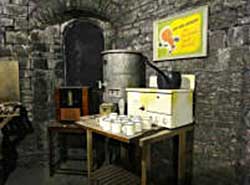 Room off the corridor showing facilities for basic cooking and water heating. 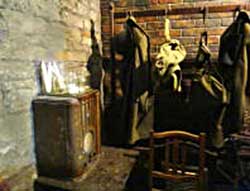 Another storage room showing candles, a radio and clothes. 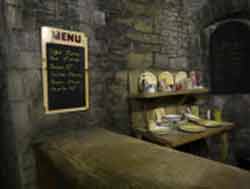 Room off the corridor showing a service counter with menu for selling food and drink.