Prisoners of war were commonly known as POWs. That was just another term that I grew up with, probably because husbands and sons of people around me were in prisoners of war camps overseas.

There were of course POW camps in Britain for captured enemy troops, but I was too young to know much about them. I did, though, know that some of the things that found their way into our house were made by prisoners of war. A wooden box that I still keep my needlework things in was one. So foreign POWs were clearly given tools, equipment and tasks to as to be useful - although of course nothing directly to do with the war effort. It was well-known that they were put to work in the fields.

What follows is by people who lived near enough to the camps to remember them. 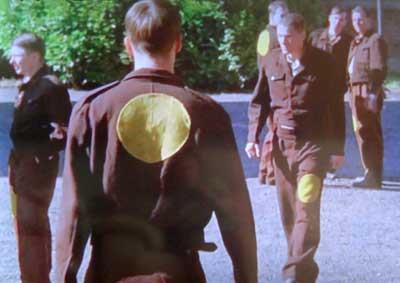 Uniform of foreign prisoners of war held in Britain

The uniform of the POW camp close to where I lived near Cambridge was striking. It meant that any escaped POWs could be recognised at a glance from front or back. It was a dark suit like a boiler suit with a large yellow circle on the back and another on the front leg. I understand that the uniform was the same or similar across all POW camps.

As I recall, the prisoners of war working outside their camp had yellow diamond shape material stitched on their jackets. Incidentally the men were very friendly and showed me pictures of their children.


How POWs were kept occupied

My aunt who lived at a place called Barling near Southend had a pair of sandals made from an old tyre which came from the POW camp at Gt Wakering, and I had various things made by POWs at the camp in Rawreth Lane, Rayleigh. These included a small brown wooden money box, a miniature chest-of-drawers. The site of that camp is now an industrial site.

The POW camp that I knew was Ruperra Castle on the opposite side of the valley to the Cefn. The German prisoners were very clever and, having not a lot to occupy their minds, would make a wide range of toys.

Prisoners of war in the community

The POW Camp in Edmonton where I lived was Italian and located at the Saracen Rugby ground in Firs Lane just behind the Edmonton Cemetery in Church Street. A family in the next road to us found one of its POWs wandering aimlessly on Christmas morning and invited him in to share in their Christmas dinner.

I particularly remember the wooden huts for the prisoners of war on the Firs Lane camp site.

To me, listening to the hatred poured out by adults ('the only good German is a dead German') and the news and propaganda on the wireless, the prisoners at Ruperra Castle POW camp seemed surprisingly nice, polite and generally very pleasant men.

I regularly saw and chatted to Italian prisoners of war circa 1943-1944. This was along the A41 Watford bypass in Edgware. At the time I couldn't understand what they were doing. There was never any fear attached to these encounters. The men always seemed friendly.


POWs at the end of the war

It took some time for the foreign POWs to be repatriated and one of the tasks given to them while they were waiting was to knock down the brick air raid shelters and fill in and cover over the underground ones.

During the war I sometimes stayed with my grandparents in the country at a place called Stocking Pellam near Bishops Stortford Hearts there they had two 18 year-old German POWs helping. When the war ended they were both in tears at having to return to Germany. They were always very friendly towards me.


When my family lived in on the coast near Newquay, I used to talk to the Italian prisoners who were removing barbed wire from the cliff top. This was after the war before they were repatriated.