World War Two evacuations: why, where from and where to

Why children were evacuated in WW2

To avoid the expected maiming and death due to air raids and gas attacks of World War Two, the British Government decided to evacuate children out of city areas to more rurual areas which were regarded as safe. This was to be voluntary, but there was much publicity which implied that loving parents ought to let their children be evacuated for their own safety. 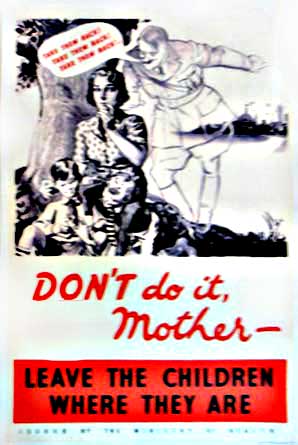 Kent, Sussex and Essex, were initially included as safe rural areas, but later evacuations were to further inland.

During the war the Salford and Manchester areas were less built-up and were thought of as separate towns. So some children from Manchester were evacuated to my parents on the outskirts of Salford even though this was only about five miles away. Not surprisingly this evacuation didn't make the children any safer! The whole area was very heavily bombed in 1940 and 1941, with attacks particularly aimed at the Old Trafford industrial area and the Manchester Ship Canal. The bombing was inaccurate and at least one bomb fell in my parents' street. So the evacuees' mother took her children back home, because she could see they were no safer with my parents than they were in Manchester with her.


Practices for evacuation from towns and cities

Evacuation was a huge logistic effort, and schools in heavily populated areas practised the march to their local station even before the war began.

The following photos shows a typical practice march. Note how long the crocodile of children is, stretching into the distance.