On some days in 1944 convoys of army lorries and tanks would pass my school which was on the main road around north London and the main route from the northern Home Counties to the London docks and Dover. The convoys continued all day.

At lunchtime we would spill out onto the pavement, cheering, clapping and shouting to the American trucks which were easily recognised as they had white stars on them. Our main cry was, "Got any Gum, Chum?".

Sometimes stick packs of American chewing gum would be thrown to us - rare plunder, especially for the older boys who could most easily catch them!

I, too, remember sweets also being thrown out to us from American soldiers. 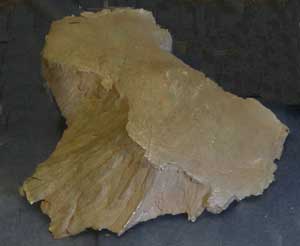 Another prize was collecting shrapnel - splinters of shell or bomb fragments. A piece passed through our roof at home while we were on holiday in 1943 and then through the landing ceiling, and to a small boy it looked huge. It was probably about 8 inches long.

When we went to school in the morning, we would collect shrapnel from the previous night's raid. It was still warm!

'Chaff', nicknamed 'window' was black paper or cotton tape about half an inch wide with two metal strips, one along each edge. I don't know the origin of the name. It was scattered by bombers to confuse the ground radar and caused the radar screen to look like snow rather than giving a clear blip. It probably also gave a false indication of aircraft height and aircraft numbers. It was a much prized find for us children and very valuable in exchange and bartering!

When I went out one morning, there were rolls of silver foil all over the place. They were 'chaff' also known as 'window' that had been released in rolls from one of our planes but for some reason had not unrolled.

I had plenty of experience of the blitz, cycling to and from Cheam to my school in Ashtead.

As soon as my friends and I saw a plane come down, we cycled off towards it - but by the time we reached the crash site, the Home Guard were usually there to keep us all at bay. If the wreck was unguarded, though, the description of piranha at a joint of beef comes to mind.

Crashed Nazi plane, a screen shot from a film, so possibly a mock-up.

Sadly we were not fussy which country the plane came from, although there was greater value to shrapnel and other souvenirs from a Nazi plane.

How could we children be so heartless and uncaring? It is quite shameful. But we did care, most deeply, as many of us had our fathers, brothers, sister, and even some mothers away in the war - and fortunately, in my experience, the pilots always managed to parachute from the planes before they crashed.

As 'Winnie' [Winston Churchill] said, "Never was so much owed by so many to so few".


Playing on the bomb sites 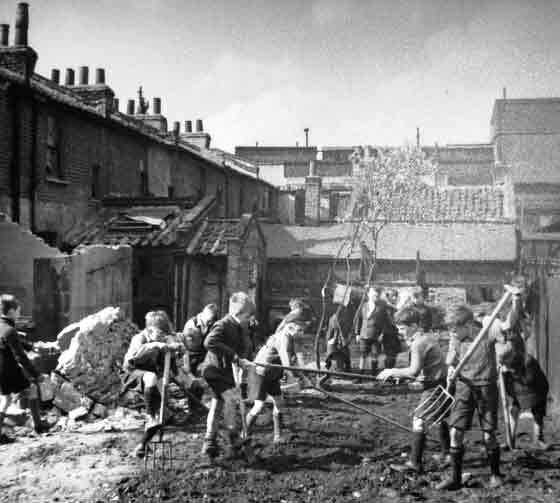 The bomb sites were children's playgrounds. We children would find all manner of things in the rubble from toy soldiers to knives. Bulbs and other plants would appear in the Spring, which were collected and taken home to parents' gardens. Then, later in the year there would be apples and other fruits for the taking.


My sisters and I, along with all the other kids in the street used to play on the bomb site opposite. One day we found a large object which we sat on and banged on, using it as a drum, In a moment, we were being dragged indoors after a man passing started shouting that it was an unexploded World War Two bomb. It was! A bomb disposal squad arrived and took it away. This was as late as the 1960s! It had lain there for 20 or more years! Our escape was in the local paper, The Weekly Herald.

The skill and bravery of our pilots

I remember a doodle bug flying over our back gardens about 20 feet above the roof tops. (This was quite frightening because if it had landed in our build-up area, lives and properties would have been lost.) 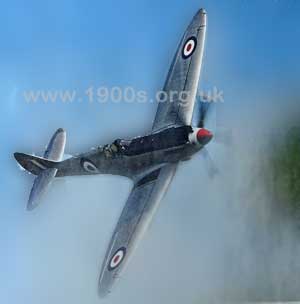 Then, as I watched, one of our spitfires did a rapid climb and then went into a full dive to get enough speed to catch the doodle bug. The pilot somehow managed to get the Spitfire's wing under the doodle bug's wing and lift it onto its own wing. The Spitfire then sent the doodle bug off on a big circle to the right. Of course the bomb would eventually come back on course, but its fuel could well have been used up, hopefully forcing it down in open country.

Barrage balloons were simply bags of lighter-than-air gas attached to steel cables anchored to the ground. The balloons could be raised or lowered to the desired altitude by winches to deny low-level airspace to enemy aircraft.

A barrage balloon was kept anchored, ready for use in our local park. One very calm summer Sunday afternoon, I saw the balloon slowly drifting in the direction of where my family lived. It had a broken mooring cable hanging from its harness. It looked very large and was probably about 20 feet high. The broken cable had just enough weight to hold the balloon at that height. Suddenly there arrived a big RAF truck with a winch. The men were grabbing the broken cable and trying to join it with a metal U-bolt shackle. This eventually achieved, they gradually backed back to the park, taking the balloon with them. I always wondered how the cable managed to break as it was quite thick and made of steel.

As barrage balloons often got machined gunned by the bombers and fighter planes, they needed to be repaired. I saw this being done in our local park. There were hundreds of silver patches all over it.

The barrage balloons in the picture from an old film use dramatic licence in that they are shown flying misleadingly low. They were actually deployed at up to 1,524 metres, to force dive-bombers up to a greater height so that they couldn't bomb as accurately.

There was also the seamier side of life, which I was not supposed to know about, but couldn't help noticing or overhearing. One of our neighbours had a sister who came to live with her for a time. There were American soldiers stationed nearby, and the sister stayed out late, spoke with a drawl, had lots of cigarettes, and an endless supply of stockings. It was the talk of the neighbourhood!