All the images on this page enlarge to a legible size on tap/click.

Letters from a soldier overseas in World War Two (WW2)

The following letters were from my uncle, Jim Cole, who was stationed in Palestine (now Israel) for most of the Second World War and were sent to his mother, my grandmother, who was living with us in Edgware. During my uncle's service, he had no leave back home in England for five years.

The size and paper of the letters 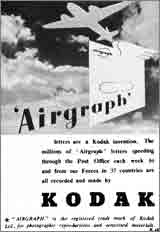 1943 magazine advert for Kodak showing that it was responsible for photographically reducing the mail from forces overseas. Photographed in Dinefwr Park House.

The letters are of general interest for several reasons: One is their very small size. The army found it cheaper or more convenient to reduce copy all the letters to about a quarter of their original size before sending them on to their destination. They arrived on very thin paper, somewhat like that of till receipts today and were difficult to read because the writing had become so small. Only one page was allowed for each letter. I don't know how often letters home were allowed. 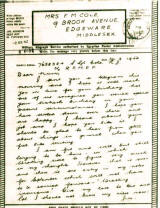 This August 1942 letter is the earliest that has survived, and perhaps not surprisingly it is rather more nostalgic than the later ones.

My uncle writes that he sent his mother a greetings telegram for her birthday and that he is longing for home. (In fact he was to be away for three more years.) The letter mentions how much Wratting is in his thoughts, particularly as the house there had been sold following the death of his father. 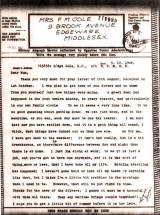 Although this October 1942 letter is not the earliest, it is presented first because it is a useful introduction to the others.

Even looking at the enlarged image, you may find the text difficult to read. In practice, the size is pretty much the same as the original, depending on how your browser is set up, because of all letters being photo-reduced for sending. I am sure that my grandmother would have needed a magnifying glass to read it.

Also of interest is the time that my uncle says it took for letters to arrive. A letter posted on the 10th of August arrived on the 1st of October. 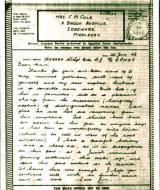 Otherwise it really says very little, other than normal pleasantries, and shows how difficult it must have been to limit what one had to say to a single page - especially as armed forces personnel would not have been allowed to write about what they were doing for the war effort. Men probably felt that it was simplest not to start on anything of any significance, especially to their mothers. I suspect that letters to wives and sweethearts, would have been different, and much more closely written. 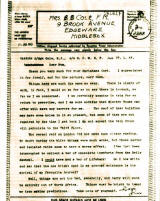 In the January 1943 letter, my uncle writes of the news of the air-raids on London and notes that the roof is off the building where he used to work.

He also mentions bars of chocolate and bars of Lifebuoy soap sent out to the soldiers as a goodwill gesture by the Daily Sketch, a popular British newspaper of the time. He chose the chocolate rather than the soap as presumably he got in early enough for there still to be the choice! 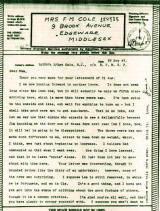 The September 1943 letter is the last that has survived.

My uncle mentions how careful he has to be of sunburn out in Palestine.

He also mentions that his mother's latest letter sounded rather like the diary of an undertaker, with so many people dying. Presumably this was from the bombing, but he did not say.

He also mentions that the war has helped him to lose weight.

World War Two British Forces Christmas card sent to my great aunt from her nephew serving in Africa, 1944. From a scan of unknown size, but probably reduced copied onto a small single sheet of very thin paper.

This Christmas card was sent to my great aunt by her nephew, Clifford Clarke. It was forwarded to me as a scan, so I never saw the original. However, it is reasonable certain that it arrived in reduced format, just like the letters, and on the same thin duplication paper.

The card carries no personal information other than the signature of the sender, in this case 'Cliff'. Nevertheless it is interesting for itself. I was told it was sent when Cliff was a sapper in South Africa. According to definitions on the internet, a sapper is a military engineer who lays or detects and disarms mines, digs trenches or performs a variety of combat engineering duties, such as bridge-building, laying or clearing minefields, demolitions, field defences, road and airfield construction and repair, etc.

4½ million British men were called up to serve in the forces in World War Two. 200,000 never returned.

quoted in the TV programme
'Turn Back Time'