For ordinary people, very few of whom were on the phone, telegrams were the only way to get urgent messages through fast.

A handwritten standard telegram, 1938. Tap/click for a larger, legible image

But there was another reason for sending a telegram. In the 1930s it was often difficult to attend events that one was invited to. This was because cars were rare luxuries. So travelling long distances normally involved taking a bus to the local railway station, then a train journey - frequently changing trains in London - and a bus at the other end. When someone had to decline a wedding invitation, it was customary to show enthusiasm and support for the event by sending a greetings telegram. This was timed to arrive so that the best man could it out to all the guests as part of this speech at the reception.

This practice like so many others, was interrupted during World War Two. I remember it well in the early 1950s when it was common practice for the best man to read out quite a number of telegrams. Then it gradually died out as faster technologies were developed.

This page shows some greetings telegrams sent for my parents' wedding in 1938.

How to send a telegram in mid-20th century Britain

To send a telegram, the sender had to go to a Post Office; the Post Office staff had to tap a message into a telegraph machine; the message was received over telegraph wires at the destination Post Office where it was either printed out on tape or rewritten by hand; then a delivery boy, known as a telegraph boy had to cycle to the destination address to deliver it. So, understandable, sending a telegram was expensive.

Charges for sending telegrams are listed in old money in an old Pocket Companion as: 9 words 6d (to and within I.F.S., 12 words, 1/6). Every additional word, 1d. Names and addresses charged for. Free delivery within 3 miles. 6d a mile beyond.

I.F.S. almost certainly stands for 'Irish Free State' as implied by the usage on the postal costs page.

Postal costs within the UK and the Iris Free State were the same because what is now the Republic of Ireland was a Dominion of the British Empire until 1937.

Three designs of telegram were sent as greetings at my parents' wedding in July 1938. Two were decorative and presumably cost more than the standard sort which was normally sent only in emergencies. Presumably senders chose the style of the greetings telegram at the time of sending, although whether their choice would be available at the destination Post Office was probably uncertain. 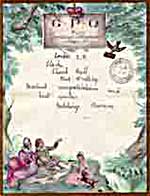 Stamp of post office receiving the telegram, showing the date received and the location of the Post Office.

You may be surprised that the address for the telegrams is given as a Post Office rather than a personal address. It was actually 'The Old Post Office', the house where my mother's parents lived, which had formerly been a regular Post Office.

The centre design in the above pictures was by far the most popular; there were only two of the first style and one of the standard style. Whether the sender of the standard style selected it on the basis of cost or whether the destination Post Office ran out of greeting forms can only be guessed at. There is more about the third example further down the page.

It is interesting to note that all the telegrams were handwritten by the staff at the destination Post Office. The West Wratting receiving Post Office was small in an extremely rural village which would not have had the latest equipment to print out the message onto paper tape. The enlarged images show that the Post Office wrote the standard telegram in pencil, whereas they wrote the greetings telegrams in ink, seemingly - but somewhat unsuccessfully - trying to make them look neater and more professional.

Below is a telegram sent a year earlier in 1937 to send greetings on the first anniversary of a marriage. It is of particular interest because it shows the message in teletype rather than as handwriting. This would have been because the receiving Post Office in Edgware was relatively new with what was then the modern technology which the rural Post Office in West Wratting lacked. The message was received on a teletype paper strip and stuck onto the greetings paper.

A teleprinted telegram, 1937, received at a major post office.

Note the brevity of the messages - which can be read clearly in the enlarged images. Greetings telegrams, like regular telegrams, were charged per word, so every attempt was made to keep the number of words down. Eventually a form of shorthand developed, not unlike that used in text messages today. The charge for the greetings paper was an add-on. There would have been some choice of design, but subject to what was available at the receiving post office.