Button A button B public phones

Few families had phones at home in the early 1940s. So public phones were in frequent use for keeping in touch and making arrangements. Telegrams were used in an emergency or for special greetings.

Public telephones could easily be recognised on the streets because they were in bright red telephone booths. These were known as 'telephone boxes', and there were plenty of them in populated areas. In rural areas they were close to post boxes, outside village shops or at crossroads.

In bus and train stations, several were located together, usually in more subdued wooden booths. 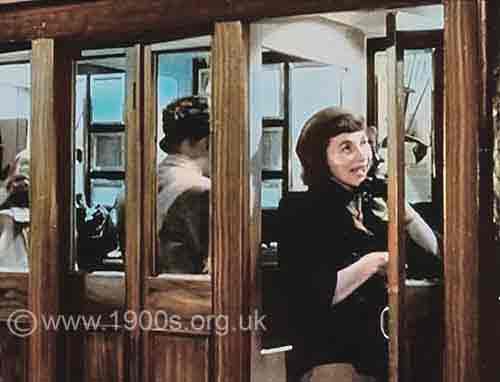 Wooden booths of public telephones as found in stations and other public places. Detail of a photograph in Milton Keynes Telephone Museum.

However, finding a public phone box did not necessarily mean that you could use it straightaway. It might not be working or unoccupied. There was often a queue, and it was rather off-putting to try to chat while people were waiting outside, possibly even banging on the window, if they thought that a conversation was taking too long.

Another reason for people waiting outside public phone boxes was that they were waiting for a call. Public phone boxes had their own numbers and could be phoned into. So people would arrange to phone one another at an agreed time and then wait outside the phone box until they heard its phone ring.

In order to make a call from a public phone box, you had to have the right coins. This was not too onerous because coins were in everyday use as there were no credit cards. Nevertheless, it was not at all unusual to be stopped in the street and asked if one had change for a phone call. People always tried to oblige each other in this respect, and I never knew of anyone getting mugged when they got out a purse or delved into their pockets for money.

Callers put their coins into the coin slot, dialled the number they wanted and pressed Button A to be heard or Button B to get their money back if no-one answered. 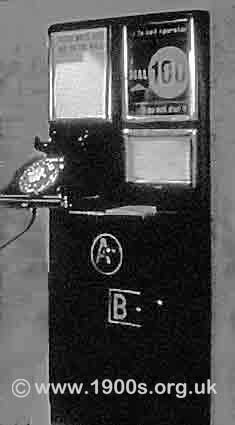 Old public phone as seen in pubs and guest houses, showing button A and button B

Pressing button A of an old public phone; note the slots by the caller's fingers for paying in coins

In busy cities queues would form for public phones, although in urban and rural areas where I lived this was unusual. I recall in the teenage years that if my friend and I wished to 'accidentally' bump into special young ladies, we would cover their likely routes of travel and use the public telephone to advise where a fortuitous meeting could occur.

Legal returns from Button B

As a child, you did not pass a phone booth without pushing button B on the off-chance in case the last caller had forgotten to collect their left-over coins. It worked more often than you might have thought and 4d bought you a lot of sweets.


Naughty but not illegal cash returns from Button B

Really naughty children stuffed a rag up the refund chute on the way to school and on the way home pulled it out hoping that Button B had been pressed in the meantime. If so the refunded money, having been blocked by the rag, came tumbling out! As a telephone engineer, I often went to phone boxes with that problem!

Inside a red public phone box

The following photo which enlarges on tap/click gives a very good idea of inside a red public phone box. 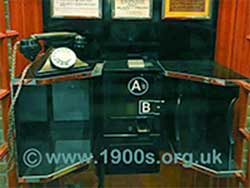 Inside a red public phone box. Photographed in Milestones Museum. Tap/click to enlarge for more detail.

Red phone boxes grew out of use once people started using their personal mobile phones, so BT started selling them off for other uses. Most common is the free library where local people donate books that they no longer want and borrow from the stock that is there. Most of these libraries that I have seen rely on honesty, in that borrowing is free and no record is kept of who donates or borrows.

Red public phone box taken over as a library