Candlestick phones were the first type of phones to reach ordinary homes, shops, offices and suchlike, although it was only the more affluent homes that made the somewhat up-market decision to go 'on the phone' in the late 1920s or early 1930s.

The appearance of candlestick phones

Candlestick phones got their name by being tall and narrow, just like a candle in a candlestick. At the time when these phones came onto the market, candles for lighting were still in daily use in many homes.

The earpiece rested on a cradle when the phone was not in use and was lifted to the ear when in use.

1920s candlestick phone with no dial

How to make a call with a candlestick phone

The earliest candlestick phones such as the one in my husband's family had no dial, just a disk stating the number of the phone and other information on making the call. Lifting the earpiece from its cradle attracted the attention of the operator at the local telephone exchange - at least that was the idea. If she didn't answer - which was not uncommon if she was on another line or chatting, the caller would jiggle the cradle up and down repeatedly.

Later candlestick phones had a dial in the base as shown in the photographs.

Candlestick phone with a dial

Then local calls could be dialled directly, but longer distance calls still had to be made through the operator. To get hold of her, you dialled O, always just called the letter O. "Dial O for operator" was a stock phrase. Incidentally there was no distinction between the letter O and zero which is why zeros are often referred to as Os to this day.

Once the operator answered, the caller simply gave her the number required. Once she had got it, she would say something like: "It's ringing for you, caller" or "You're through". She could if she so wished amuse herself by staying on the line and listening to the conversation. Callers could do nothing about this, however much they objected to it.

Post Office instructions on making and receiving a call

The Post Office thought it necessary to instruct callers on speaking clearly to the operator when using early phones. Instructions were as shown in the transcription in the boxes below where 'subscriber' is what we could call 'caller', and 'telephonist' is what we would call the 'operator'. (Try to ignore the sexist language which was completely normal at the time.) 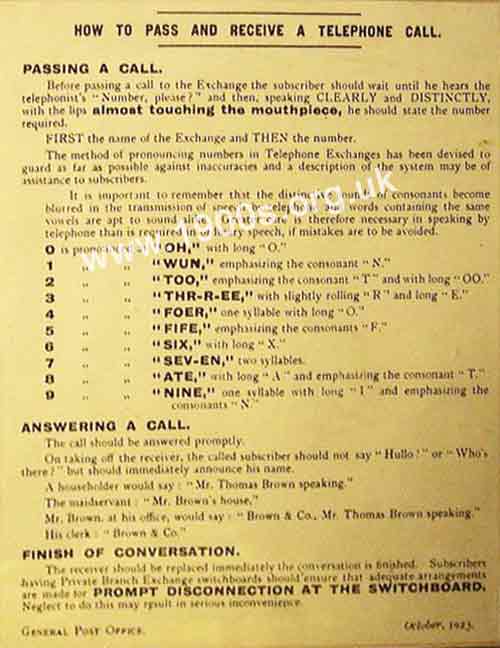 1921 poster of instructions on making and receiving phone calls: poor quality original but transcriptions are in the following boxes.

[Having lifted the receiver] the subscriber should wait until he hears the telephonist saying "Number please?" and then speak CLEARLY and DISTINCTLY with the lips almost touching the mouthpiece. Then he should state the number required. FIRST the name of the Exchange and THEN the number.

[Greater care is necessary in speaking by telephone than in ordinary speech if mistakes are to be avoided.]

Try as I may, I cannot say 4 the way the Post Office advised.

How to answer a call - instructions from the Post Office

The call should be answered promptly.

On taking off the receiver, the called subscriber should not say "Hullo*" of "who'se there?" but should immediately announce his name.

* 'Hullo' often appears in old books for what we know as 'Hello'.

How to end a call - instructions from the Post Office

The receiver should be replaced immediately the conversation is finished. Subscribers having Private Branch Exchange lines [shared lines] should ensure that adequate arrangements are made for PROMPT DISCONNECTION AT THE SWITCHBOARD. Neglect to do this may result in serious inconvenience.

It is interesting to see how much norms have changed over the years.

Quite apart from the fact that telephoning through the operator could be slow and often laborious, the phones themselves were awkward to use. Two hands were needed: one to hold the earpiece to the ear and the other to hold the mouthpiece to the mouth. This meant that one part of the phone had to be put down in order to write down messages.

One way round the problem was to mount the phone on the wall, but it was not easy to position so that its height was right for everyone.

The newer phones of the 1940s were far more convenient in that both the mouthpiece and the earpiece were in the same unit and could be rested on a surface or held in one hand, so freeing the other for dialling and taking down messages.

Photographs by the webmaster with acknowledgments to Milton Keynes Telephone Museum