In the early years, connections between telephones were made manually, ie neither automatically nor electronically. 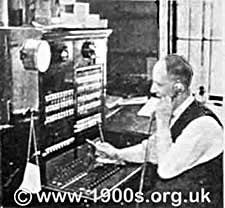 Telephone operator in a small rural exchange in the late 1930s. A detail from a photograph in the Milton Keynes Telephone Museum.

In the early years of telephones, exchanges had just one operator, who worked at a single switchboard in the local post office. He or she was probably also responsible for other post office work, as there would have been time enough. Few households had phones, although most businesses did, and calls were expensive. The operator may have been the postmaster or postmistress.

Operators of local manual exchanges usually knew what was going on in the area. They had to listen in to put a call through and could easily continue listening if they felt like it. My aunt's phone was on a manual exchange in Essex the 1950s and 60s. She was a district nurse, and when I phoned the operator to ask to be put through to her and she wasn't in, the operator frequently knew where she was and would say, "Nurse isn't in, she's at .....".


Telephone exchanges in the 1940s

Small, manual exchanges were gradually replaced by grander custom-built telephone exchanges serving larger urban areas and staffed by dedicated operators. By the 1940s, telephone exchanges usually employed a large number of operators, who were generally known as telephonists, although when they spoke to subscribers, they always introduced themselves as operators. Telephonists always seemed to be women - although I note from the information in the box below that this was because I only ever interacted with them during daytime.

Telephonists were regarded as having good jobs. They had to have good speaking voices, and - as my mother told me - they had to be over a certain height, presumably to reach the top sockets of the junction boxes at the larger exchanges. My mother's sister-in-law was rejected on the basis of height although her sister was accepted. This apparently led to bad feeling in the family as one sister had a better paid job than the other.

During the Second World War and even later, many of the early manual exchanges were still in use in small, isolated country areas. Our first telephone - a wind-up one - was connected about 1950. It was still in use until about the middle of the 1980s when the exchange was moved from the post office and made automatic. Most of the older types of manual exchanges, though, were probably obsolete by the 1960s.

The small exchange in our village was about half the size and capacity of the manual exchange pictured above.


How a large manual telephone exchange worked in the 1940s

When a subscriber lifted his telephone, it lit a lamp on the lowest section of the panel in front of the operator. This section was called the 'Home section'. The operator would then insert a plug into the appropriate jack to connect to the subscriber and say, "Number please?". 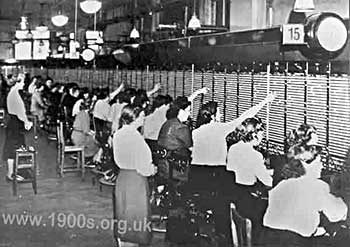 Large manual telephone exchange. Note the supervisors standing behind five or six telephonists to oversee them and the senior supervisor overseeing everyone. Detail from a photograph in Milton Keynes Telephone Museum.

If the call was to another exchange, the operator would make the connection via a 'junction' and one or more operators at an intermediate or distant exchange.

There were about ten positions for incoming calls; these were known as B positions.

While the telephonists sat at their positions, a section supervisor would look over five or six of them from behind. She would watch every move and listen to every word that was said. Above her was the chief supervisor. Her desk was on a raised dais and she had facilities to enable her to listen in to what was being said at any position. She was a god!

During the worst of the bombing in World War Two that numerous bits were blown off the exchange and it was frequently prudent to go into the shelter.

With a daytime air raid, the exchange still had to keep working, so we lads always insisted on the girls going into the shelter while we took over the switchboards. There would be three or four of us instead of 20 or 30 telephonists. Gone was the polite request for, "Number please", and in its place was, "Is this call of urgent national importance?"

Most of the calls during air raids came from police, ambulance, fire or ARP services, and the vast majority of people appreciated and respected us for staffing the exchange under such conditions. However, on one occasion I took a call from a lady who confirmed that her call was of urgent national importance, but the number she asked for was of the local butcher. I connected her but broke all the rules by listening in. She was complaining to the butcher that her meat had not been delivered and she demanded that the butcher's boy be dispatched immediately with it - this during an air raid. I took a very poor view of it all. So I interrupted the call and said, "I thought this call was of urgent national importance" and disconnected it.

Nights in the air raid shelter

On one occasion heavy bombing began in the afternoon and there was no way that the female telephonists could get home. So numerous beds were prepared in the shelter by arranging blocks of wooden benches. When it came time to get some sleep, one of the supervisors ordered all men out of the shelter while the girls got ready for bed. We left, although bombs were still falling around us. When we were told we could return, all the girls were lying down covered in blankets.

The supervisor allocated all men a place and then announced that she was going to spend all night awake in a chair to make sure that nothing untoward went on. My place was across the foot of a bed in which 13 girls were trying to sleep. Thus I can claim to having been in bed with 13 girls at the same time.

The intense bombing damaged many of the outside cables. The external staff worked wonders renewing and repairing them.

*Name and contact details supplied to the webmaster but not for publication.