These early phone boxes for public use were known at the time in the UK as telephone kiosks, telephone boxes and public phones. 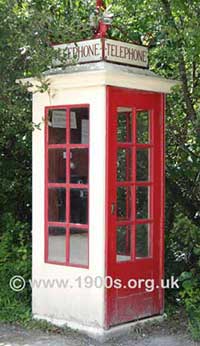 This was an age when personal phones didn't exist. Most people didn't even have a phone at home, let alone a personal one to carry around. Phones were so rare and valuable that they were made available for the general public in specially constructed weatherproof booths positioned in public areas. A typical one is shown in the above photo.

I was born in 1939 and was well familiar with telephone boxes while I grew up in London in the war years of the 1940s. Yet the public phones that I saw were only of the type described on the public phones 1940s and 1950s page. This is rather surprising as I would have expected some of the old technology still to have been around. Of course during the war years, I didn't travel much.

In fact, until recent years, I had no idea of the existence of versions of telephone boxes before the 1940s50s type. Then I saw a 1920s type in a museum. I assumed that it must have been quite rare, but, looking through my collection of older street scenes, I came across one of the same sort on a pavement of an ordinary town - see below. 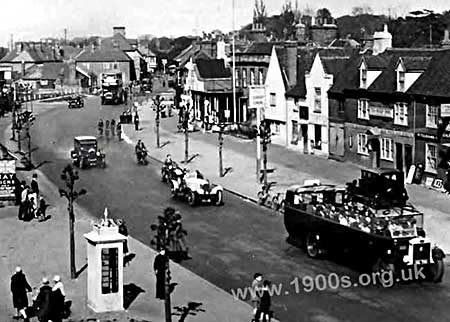 The experience of using a 1920s30s public telephone box

From the photo of inside the museum phone box, it is clear that the user experience is similar to that described on the page about using the 1940 and 1950s public phones: There is the familiar button A and button B and slots for coins. 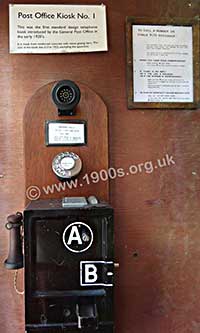 Inside a 1920s30s public phone box showing the buttons A and B like in the 1940s and 1950s public phones, but with a separate earpiece.

According to the information at the top left, the phone box, called a phone kiosk, was made from reinforced concrete with metal glazing bars. In 1925 it cost £13 excluding the apparatus inside.

The coin slots for shillings, sixpences and pennies. The photo shows the head of George VI which were probably all the coins that the museum had available in the way of pre-decimal coins, although at that time George VI was not yet king.

There were, though, also significant differences. The phone itself seems to bear more resemblance to a candlestick phone. I wonder whether the mouthpiece was moveable because it looks not, in which case it would have been difficult to use for anyone shorter than a standard height. The earpiece is separate like on a candlestick phone, and the telephone dial does not show any letters with the numbers. This implies that there were no area codes and that all but local calls would have had to go through the operator. I can't say whether the user had to dial O or whether there was some other way of connecting to the operator. If you know, please do tell me.

Costs of public phone calls in the 1920s

The cost of a local call up to 5 miles was 2 old pennies (2d) when the A.B box was introduced in 1925. The cost of these calls was increased to three old pennies (3d) in 1951. Local calls on A/B boxes were untimed.

In real terms, phone calls were very expensive. The coin slots show that calls costing shillings and sixpences were expected as well as those costing pennies although it isn't clear how much time these bought for what distances. In the 1920s quite a lot could be bought for these amounts of money, and calls outside a local area, known as trunk calls, could be very expensive indeed.