For local calls from a public phone, only pennies were needed. They were of course 'old' pre-decimal pennies.

As one born in 1943 I can say that in 1950 public phone calls cost two old pennies (2d) without a time limit. Eventually this rose to 4d, still untimed. Timing came in around 1960 when I was courting, and the cost was initially 3d for 3 minutes. Slots were then provided for 3d pieces and 6d bits. Some rural box’s had yet to be changed.


In 1951 the cost of a local call up to 5 miles was three old pennies (3d). These calls were not timed on A/B boxes. Then price increased to four pennies (4d) on the first of January 1957 and later that year the distance for 4d was increased to 15 miles.

I believe the cost went to 2p when we were decimalised in 1971. However the 2p coin was the same size and weight as the old halfpenny and a lot of phones as well as slot machines would accept both coins - which made calls and purchases cheaper!

Larger denomination coins were needed for non-local calls which were known as 'trunk calls'. They normally had to be put through to an operator by dialing O .

With the agreement of the person receiving the call, charges could be reversed by going through the operator. These calls were free to the caller, but I don't know whether the recipient had to pay some sort of premium.

In spite of the extra charge for a reversed call, it was useful, particularly if:

• You needed to make a phone call from a public phone, but didn't have any money, and

• You wanted to use somebody else's phone, but didn't want to put them to the expense of paying for the call.

Both of these were important to know about as a child/teenager in the 60's and 70's* if you needed to be able to phone your parents.

At an extra cost, a caller could go via the operator to put a call through to a partic­ular named person. This was useful for expensive trunk calls if the person concerned was likely not to be available. Then the call would cost nothing.

Phone calls were expensive in real terms, and if chatting it was all too easy to run out of coins. Pips would sound and a few seconds later, the line would go dead unless more money was fed in. If the caller expected a long conversation, he or she could feed in a lot of coins at the outset as pressing Button B at the end of the call returned unused coins. However, the process was fiddly and people didn't like to carry a lot of coins around because pre-decimal coins were so large and heavy.

On one occasion my friend and I got exceptional value for our money, albeit with a waste of our time: We made a person to person call to a friend in a London Hall of Residence. It took over an hour to find him and bring him to the phone, but in the end the call cost just a few pence because it was only charged from when he came to the phone and confirmed his name.

Before the 1980s, the only way to pay for a phone call from a public call box was either with coins, by reversing the charges or by illegal means. That changed in the 1980s with the phonecard. 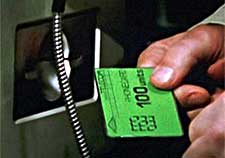 This could be bought from retail outlets for specific numbers of units which could buy an equivalent time of a phone call from a public call box. I had such a phonecard, but seldom had any cause to use it because I worked close to home which had a landline phone.