When I was growing up in the 1940s and 1950s, telephone numbers were much easier to remember. One reason was that fewer people were 'on the phone' so fewer numbers were needed and therefore did not need to be in such a long string.

Notice inside an old London area telephone box listing all the London letter-based area codes. Notices in other telephone areas would show their own area codes. Photographed in Tilford Rural Life Centre.

The other reason was that there was some logic to area codes, in that they started with the first three letters of the local telephone exchange. Our family number was STO 9804, where STO stood for Stonegrove, which was an area of Edgware where we lived. Such phone numbers were pronounced with their full name. So when we announced who we were when we answered our phone, we said, "Stonegrove 9804". (It was considered very bad form just to say "Hello"!)

All the telephone dials that I knew had letters as well as numbers.

Areas which had letters in their 'phone numbers'

In the middle of the 20th century, only telephones in the wider areas of London, Birmingham, Edinburgh (from the early 1950s onwards), Glasgow, Liverpool and Manchester had letters on their dials. Elsewhere, even the automatic telephones just had numbers. When dialling a city number from a rural area you had to go through the operator by dialling 0. 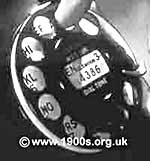 Area codes really came into their own around 1958 when Subscriber Trunk Dialling (SDT) started. It enabled users to make trunk calls without going through the operator - although it was still possible to get through to an operator, now by dialling 100 instead of 0.

The changes to the ways of dialling were already happening at the time of the listing in the image as it instructs users to dial 100 for 'assistance'.