What train travel was like for passengers in 1940s wartime UK 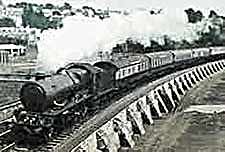 Dirty, sooty steam from the engine of a steam train

Why the importance of travelling by train

Trains were by far the main mode of travel for any distance  in Britain during World War Two.

Very few families had cars, and even where they did, the car driver was invariably the man of the house who was away serving in the armed forces. Petrol was rationed anyway and often unavailable for anything other than essential services. So trains were the only realistic option for relatively long distance journeys.

Overcrowding and discomfort on trains

My memory is trains were not particularly comfortable because they always seemed to be packed with army, navy and airforce personnel, often with standing room only.

Also trains were dirty because the engines were still steam engines running on coal and producing soot. 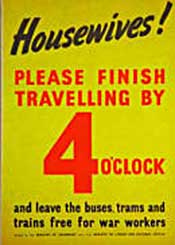 Poster urging housewives to free up trains, buses and trams for the war workers.**

Long distance journeys were a matter of necessity or special treats for families - although not of course for forces personnel. Money and resources were in short supply, and everyone felt that they shouldn't travel without good reason. 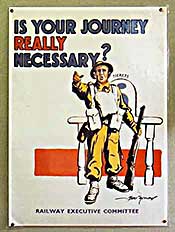 Back in the 1940s, my mother did take me with her on a 'long' journey. That was to visit her friend no further than the other side of London. Also on one occasion she took me on an even longer journey to see my father who was on leave from the army. A leave of absence from the armed forces was invariably short and often measured in hours rather than days, so my parents probably thought they would have more time together if my father didn't have to do the travelling.

Trains after the war

After the war and even into the 1950s, little seemed to change on the railways. Britain was still recovering from the ravages of the war and there was hardly any spare money for investment.

Certainly I remember, in the late 1950s, my face being black with soot after travelling between London and Exeter in a train pulled by a steam engine, powered by burning coal. Of course it was my own fault for leaning out of the train window! There was always a great deal of smoke from these engines.