When I was growing up in 1940s and 1950s Britain, passenger trains were made up of a steam engine at the front, a guard's van at the end and passenger accommodation between.

However these trains were more different from modern trains than this description suggests. Read on:

What are today known as coaches were always known as carriages, which was presumably a hang-over from the horse-drawn carriages of Victorian and Edwardian times.

Inside each carriage were a number of smaller compart­ments with a set of two padded bench seats: one facing the engine and the other with its back to the engine. The only exception to this division inside carriages was in the dining car. Before the war dining cars were common, but I never saw any during wartime, but that may have been that my mother never took me.

Coaches were connected by corridors on trains for longer journeys, but there is more about this elsewhere on the website. 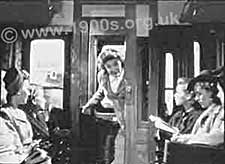 A train compartment with its door to the corridor open

The compartments of trains intended for long distance travel were connected by a narrow corridor along one side. Frequently stopping trains had no corridors.

The corridors were useful for walking along to find a seat on a crowded train and to reach a lavatory at the end of the corridor. 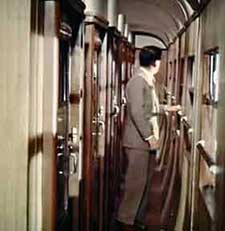 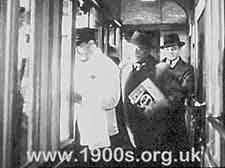 A train corridor, showing how crowded and difficult to move it could become

Where there was no corridor, it was a sign of the times that my mother would walk along the platform choosing her compartment according to there being no man alone in it. Only a compartment with at least one woman was considered appropriate, and it was best if she was elderly. Apparently there had previously been 'Ladies only' compartments and some may still have been in service, but I don't remember them.

Smoking was an accepted way of life in the 1940s, so almost all the compartments allowed it. The only notices about smoking were in a few 'No Smoking' compartments. These compartments were normally at the front and back of a train, but they were patronised by relatively few people because everyone, including non-smokers like my mother, was so used to cigarette smoke that they hardly noticed it.

Before the war, passengers gazed across at each other from their upholstered bench seats, and no one spoke; heads were hidden behind newspapers.

Come the war, we were all one, strangers no more. Talk about air raids, food rationing, battles and films filled the carriage.

Yet, when the war ended this chatter ended too, The reserved English manner returned and people gazed anywhere rather than make eye contact.

Luggage racks were above the passengers' heads, and were corded like hammocks. Being corded, dirt and dust simply fell through them, which must have made cleaning easier - although of course, being fabric, they would hardly ever have been washed.

On a wartime train journey from Leeds to Edinburgh in early 1945, the train was packed with troops. I saw men asleep on the luggage racks and asleep on luggage in the corridors. This was by no means unusual.

The communication cord - for an emergency stop

In the case of emergency, passengers could stop trains from inside their compartments. There was a chain which passed along the train to ring a bell to alert the driver to stop. It was called the communication cord even though it was a chain, and it was high up, out of the reach of children. I seem to remember from the 1940s and 50s that it was behind a thin pane of glass which passengers had to break to reach it. 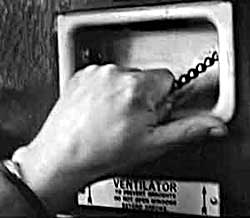 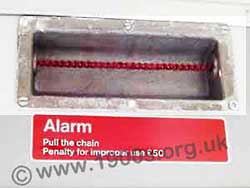 The communication cord of a 1960s train 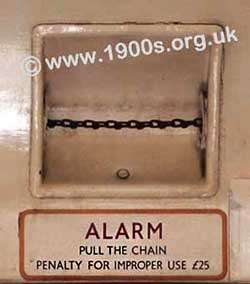 The communication cord of a 1950s train on the Bluebell Line. Photo courtesy of Les Haines.

Note how the fine for improper use has increased, from nothing (apparently) to £25 to £50 - but see Malcolm Keen's comment on the penalty in the 1940s.

How misuse of the communication cord was prevented

When the train communication cord was pulled, it did not return to being taut when released, so the compartment could be identified after the train stopped. This fact was widely known and prevented misuse.

I never knew of anyone who pulled the communi­cation cord, although it must have happened. The penalty for improper use was severe. As the photographs on the right show, the penalty was £25 in the 1950s and £50 in the 1960s - which was quite a lot of money then. In the 1940s, the penalty was probably less, but I can't remember the amount. In the early trains, passengers appear to have been trusted, as no penalty for improper use was stated.

On the penalty for misuse of the train communication cord, I recollect that in the 1940s and possibly the earlier part of the 1950s it was £5, presumably with one of those lovely large white fivers that had to be folded to get it into the wallet.