Ticket inspection at the start of a train journey

To get onto a railway station platform, we had to show our travel tickets or platform tickets to a member of station staff who would be standing at the platform gate. There was usually one or more of them on duty - although this wasn't always the case. Sometimes the tickets were snipped to confirm that they had been seen. Automatic barriers were years away.

Entering a platform at a large terminus. The gate is half closed. 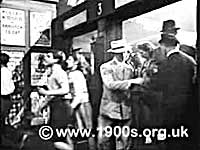 Ticket collector collecting passengers' train tickets at the end of a journey.

Ticket inspection at the end of a train journey

To leave the platform at the end of a journey, we had to give up our tickets to a ticket collector who stood at the platform gate. I never understood how tickets could be inspected properly when hoards of passengers streamed on and off a busy train, but some passengers certainly were called back, so there must have been some cheating.

Tickets were not normally checked on the train although there were random inspections.