We bought tickets for train journeys at the station ticket office and paid by cash. There were no credit cards. 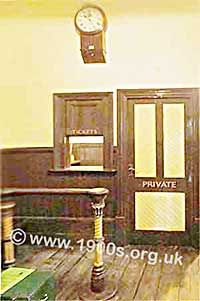 Station ticket office, photographed in Milestones Museum, Basingstoke. Note the how much use is made of wood, and also note the station clock which was very important for catching trains on time, as few people had watches.

We had to allow plenty of time for buying tickets because we couldn't predict how long the queue would be at the ticket office. They couldn't be bought in advance.

The ticket office at a local station kept pre-printed single and return tickets for most popular destinations in top-fed bottom-dispensed vertical stacks. There was date stamp used to frank the back side of ticket, both ends for a return.


The date stamp for dating the tickets made a sort of 'thunper- thumper' sound.

Tickets for ordinary travel were small and made of thick, rough paper. The ones I remember were pale green. Return tickets were the same size and had to be torn in half with one half for the outward journey and the other half for the return journey.

Train ticket. Detail of a screenshot from an old film with the destination imaginary. The thumb shows scale.

As far as I remember there were stacks of them within easy reach of the booking clerk who was selling them. All he had to do was to reach for the appropriate ticket, date it, hand it over and take the money. Tickets were not specially printed for each journey. Tickets to get onto a platform to see people off were known as 'platform tickets'. Although platform tickets could be bought at the ticket office, there were also machines which sold them. They always seemed to cost a penny (in old money), as did a visit to a public lavatory.

Most workers - including my father once he was back from the war - bought season tickets for travelling to and fro work. These were for several weeks at a time and worked out cheaper for making the same journey every working day. Working from home was very rare indeed. Probably cheques were accepted in payment for what was at the time a great deal of money for ordinary people. Being pre-payment, it wouldn't matter if the cheques bounced.

Season tickets were larger than tickets for single journeys, about the size of a modern credit card.

Below are the front and back of a 1954 train season ticket, courtesy of Francis Duck. It seems that that as late as 1954 there was still a third class and that the fare for a return journey of approximately 15 miles for just under 10 weeks was £1-18-00, ie not quite £2 - an indication of inflation!

Tickets for Her Majesty's Forces

As a child in the 1940s, I remember women talking about their men on leave from the war having a 'travel warrant', but I was too young to pay much attention. Fortunately Alan Bennett has provided a separate page on travel warrants.

Were any other types of personnel, apart from members of the forces, issued with special train tickets or vouchers?