How early train doors opened in the UK

Unlike today's train doors which are opened and closed electronically along the length of a train, each door of early trains had to be manually opened and closed. So whoever wanted to get in or out had to open and close the doors themselves.

When a train was about to leave a main station or terminus, the platform gates would close a few minutes before departure to give time for the guard to walk along and check that every door was properly shut. In smaller stations, where only a few doors would be opened at any one stop, the guard would look out of his window to see which doors might need his attention. He could probably tell from the sound whether or not a door had been properly shut. 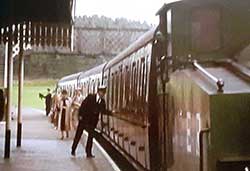 During the 1940s and 1950s, I particularly remember how difficult it was to open train doors from the inside. The problem was the handles.

As there was no central locking mechanism to prevent doors being opened while the train was moving, I suppose it was sensible to make the latches stiff for safety reasons. There were certainly notices up about not opening doors until the train came to a standstill. 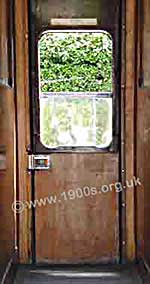 Inside of old train door


In practice, passengers in a hurry, always did seem to open the door and jump out while the train was still drawing to a halt on a platform, but they must have been fit anyway or they could never have managed to get the door open.

Someone jumping from a moving train, having opened the door, a screen shot from an old film

Old films often added drama by showing people being thrown out of or jumping from moving trains, and this was certainly possible in theory. However, the latches were so stiff that I for one, even as a teenager, needed both hands to open them.

In 1955 between school and National Service, I needed work. One job was to clean train carriage handles with pumice stone. The handles were brass and I was instructed by the regulars to clean what showed only. Thus the front was shining and the rear of the handles was somewhat mucky.


Doors that opened only from the outside

Some of the later mid-20th Century trains had door handles that only opened from the outside - which was, I suppose, to improve safety. It meant, though, that if no-one on the platform wanted to get in at a particular door, and passengers wanted to get out, the passengers had to lower the window and lean out to get to the exterior handle. 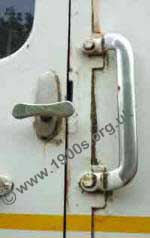 A grab handle and a door handle on the outside of the door of an old train, reached from the inside by leaning out of the window**

So opening this type of train door was a dirty business as the inside of one's sleeve had to go tightly over the open and invariably sooty window, and it also required a certain amount of strength. When I needed to get out, I would walk along the corridor to find a male passenger with a long arm waiting to get out, and let him lean out of the window to open the door.

How much better is today's system where passengers open doors with buttons, but only when activated to be safe!