Some carriages of corridor-trains had toilets, situated at the end of the carriage. The cubicles were made or faced with dark wood, as was so much in the era before man-made materials. 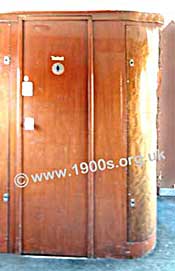 Why the train toilets were to be avoided

The toilets always seemed to smell, were usually out-of-order, and were to be avoided if at all possible. This state of affairs went on for some years after the war as Britain did not recover quickly.

The contents of passengers' visits

The contents of passengers' visits flushed directly onto the train lines. So - not surprisingly - there were notices inside the toilets saying that the toilets were not to be used while a train was in a station.

Notice inside the toilet of an old train, requesting passengers to refrain from using the toilet while the train is in a station. Photographed on a Swanage Heritage Line train.

The toilets locked with a bolt.

The window as a train toilet

Many of the trains were just compartments with no corridors. They were intended for short local journeys, but with the deprivations of the Second World War, this was not always possible. So some long distance trains had no toilets. Other trains had broken ones, and sometimes they were occupied for long periods.

Maintaining dignity while using the window as a toilet

On a long journey in 1945 I was with two other ATS* girls in a train with no corridor and hence no toilet. In our carriage were three young sailors full of beer, and one needed relief. So the sailors opened the window and shoved their tipsy mate to the opening. Then because there were girls were present, they held a great coat over his back so we couldn't see. In that way he was able to pee out of the open window.

Getting a shower while using the window as a toilet

One time I took the night train to London amid an enormous number of sailors who were going on shore leave after their ship had paid off at Plymouth. As they had had much of the day to celebrate and were flush with pay, they had had their full of drinking and were sitting, standing, singing, arguing, shouting and moving up and down the packed corridors.

At one point, a very indignant sailor came along the corridor fulminating at the ticket inspector. It turned out that the sailor had needed to drain his bladder and the toilet had been 'Engaged'. However he found that by standing on tip toe he could carry out the operation through the open window of the train door outside the toilet.

While busying himself in this way, the ticket inspector came through the corridor connector, put his hand on the sailor's shoulder and pulled him back down onto his feet. The result was that the sailor ended up with a very wet front to his carefully pressed bell bottoms*.

*The loose trousers that sailors wore were informally known as 'bell bottoms'.

A ditty about train lavatories sung in WW2 forces

My apologies that I can't remember all the words, but I do remember that the following ditty was sung to a classical tune.

Having compared a rendition of this on YouTube to songs available after searching the lyrics (here and here) I believe this is what Kath O'Sullivan is referring to. I must confess that the tune is a rather pleasant one, even if the lyrics leave something to be desired!

On this page Wikipedia refers to Dvořák's Humoresque Number 7 as the tune for several songs of a similar nature in the United States.

Most passengers just put up with it somehow, but there was another solution - for men, but not women - see the boxes.

*Photographed by the webmaster on a Swanage Heritage Line train