After the end of the Second World War when petrol became available for leisure use - albeit still on ration - cars started to trickle back onto British roads. 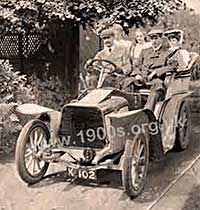 As new cars were not immediately manufactured after the war, those that I remember from my childhood in the 1940s and early 1950s tended to be those that had been stored away in garages during the war. They had mainly been manufactured in the 1930s; some even earlier.

As my family did not have a car while I was growing up, I viewed these old cars almost entirely from a distance. What struck me in particular were the following, the first four features of which are described below and the last of which has its own page:

Some of these features are clearest in the photo of a 1920s car, which, being earlier, was less streamlined than later ones.

The box-like appearance is obvious from the first photo.

The box-like appearance of old cars

The box-like appearance of old cars is explained by their having no boot until the early-mid 1930s. The spare wheel was usually mounted vertically on the outside of the body with an external folding luggage platform providing carrying space.

Why doors were called 'Suicide doors'

Doors of some early cars were hinged at the rear which meant that if opened slightly while the car was imoving, they would be forced all the way open by the pressure of the air due to the car's motion. This was the case with the rear doors of our 1935 Morris Ten, whereas it was the front doors of our 1939 Riley. This was extremely dangerous, as can be imagined, but the term 'suicide doors' may be North American.

Car windows were made of some sort of cracking, brownish plastic, which was not really any longer properly transparent.

Celluloid was used for flexible car windows and I understand that early safety glass was a sandwich of glass and celluloid. The celluloid used to yellow and eventually brown over time, so was not ideally suitable, but better than shards of glass in an accident. Celluloid dates from about 1885 and until the early 1920s was one of the commonest plastics around.

The drivers must have had to drive with the windows open or with a hole pushed through them, in order to see safely - not that this would have been as dangerous as it sounds because there was so little traffic.

My father had a Morris 8 car in the late 1940s and its full windscreen was hinged along the top and could be opened out and held open with side brackets. I think that the windscreen wiper motors were attached to the top of the screen, but I'm not certain. I'm not sure whether it was to cool off the car after standing on a hot day or a modern form of air conditioning!!

I think that the opening windscreen could have been to improve visibility in the all-too-common fogs or when the windscreen got misted up.


Yes opening car windscreens were for fog use - as I can confirm from personal experience! What with poor wiper performance in old cars (some with only single blade ), poor headlights, or a pea-souper fog at night, front-opening windscreens were really needed!

On any reasonably long car journey, the car windscreen would always be splattered with dead insects. This was evidence of the large number of insects in ordinary air. They were killed as moving cars drove into them. This is something that never seems to happen these days due to modern pesticides and the large-scale destruction of wildlife in recent times.

Insects on a car windscreen, normal in mid-20th century 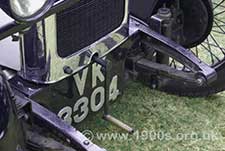 The engines of these old cars needed to be started manually using what was called a 'starting handle' - see the photo. This had to be inserted into a hole at the front of the car and turned with a good 'thwack'. It often needed a number of turns.

How to hold the starting handle

Why a starting handle was necessary

There were no multigrade oils to lubricate the engine. The engine oil was usually Castrol XL. The colder the weather, the thicker the oil became, so the low capacity lead battery struggled to turn over the engine fast enough for --- to 'catch'. The starting handle was common in post-war cars for quite some time.

Old cars had sturdy ledges on both sides running between bulky front and back wheel mudguards. They were called 'running boards', although I have never understood why. I suppose they were designed as steps for passengers getting in and out, based on the old horse-drawn coaches which were higher than cars. 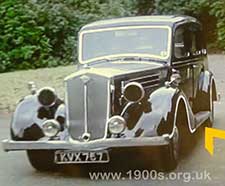 Running board on an old car

Running boards served as shelves for petrol cans, first-aid cans and holders for spare wheels. I also saw running boards used as seats when the cars were parked and as something for joy riders to stand on while cars were moving - a dangerous occupation which would probably not be allowed today.

The bonnets on most late 40's/early 50's cars consisted of separate halves, so that you could lift up the right-hand-side or the left-hand-side to get to the appropriate part of the engine.

Sometime in the early 1950s I had a long journey in an old 1930s-type car. I was appalled at how uncomfortable it was! It was winter and very cold indeed, and there was no heating. I don't think that the car had much in the way of springs or the seats much left in the way of padding, and there were of course no seat belts. There were no motorways, so the frequent twists and turns in the road kept throwing me around. I felt sick, stiff and cold way before the end of the journey.

The images show the 1939-1940 driving licence for my mother-in-law who drove ambulances during the war. Young women with no pre-school children had to go into employment, by law, during World War Two to fill the men's jobs.

Like many other ordinary families, my father bought our first family car in the late 1950s. Such cars were newly manufactured, rather than second hand older ones.

Our car was a Ford Anglia which sold widely, probably because it was relatively inexpensive. To everyone used to the appearance of the old cars, Ford Anglias were dramatically different because they were contoured to look as if they were rapidly accelerating, with an inward slanting back window. Gone were the 1930s-style bulky mudguards over the wheels and running boards.

Advantages of the Ford Anglia's inward sloping back window

Although the idea of the Anglia car's forward sloping rear window never caught on for other makes it had a wonderful advantage when it rained: the window would remain clear and would also not fog up as easily.

My father, like most drivers, belonged to the AA (Automobile Association).