Hand signals for traffic control by police and drivers

A guest contribution by Mike Wheale in association with his father, Les Wheale (born April, 1914)

Hand signals by police to drivers on 'point duty' 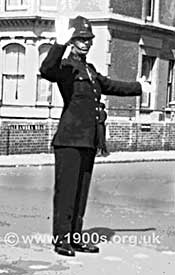 A policeman on point duty. A family photo.

In the early days of motoring there were virtually no traffic lights. When junctions were busy at certain times, a policeman would go on what was called 'point duty' or 'traffic duty', where he would stand in the middle of the cross roads and direct the traffic. With some crossroads which were continually busy, he would stand on a small pedestal, so that the traffic could see him. (One does wonder of course how 'busy' was busy because there were so few cars on the roads in the first part of the 20th century.)

AA men would also stop and direct the traffic in the same way, if they came upon a road junction or accident where motorists were being held up.

The policeman's hand signals to drivers

The policeman would stand facing one direction with his right arm raised, palm forward, to stop oncoming traffic which was facing him. He might also be holding his left arm horizontally to stop the traffic behind him. He allowed traffic to proceed with a scooping movement with his right hand; palm facing himself and bent arm rotating towards him.

Such signals are intuitive and we still use the same ones ourselves in everyday life.

As all traffic had to stop and wait to be directed by a policeman on point duty, the motorists used specific hand signals to tell him where they wanted to go.

These signals grew into disuse with the development of trafficators and then flashing lights.

Hand signals were used by motorists to tell other road users where they were going:

There was also an unofficial hand signal to call motorists behind to pass or overtake. It was to put the arm through the window and use a scooping motion.