Bicycles when few people had cars

When I was growing up in the early 1940s, bicycles were the only way to get around without having to rely on buses or trains. Motorised vehicles did exist but because it was wartime, petrol was for essential work only. So right up to around the end of the 1950s it was expected that children and young adults owned bicycles. Plenty of older people did too.

Wherever possible, home deliveries were made by bicycle.

Children and teenagers from ordinary working class families never had new bicycles. Their bicycles were cast-offs from families whose children had grown out of them. These bicycles usually looked second hand and showed their years of previous use. No-one thought anything of it.

How to make a cast-off bicycle fit

My childhood bike was a cast-off and it was really too big for me. So my father wrapped a blanket found the frame's crossbar in front of the saddle to serve as a makeshift saddle.

Accessories, though, were a different matter. They were often status symbols. This was my experience in the late 1940s and into the 1950s when I was developing a social life.

I don't know if there was a law that bicycles should have a bell to warn of their approach, but it seemed generally understood that they should. The bell was a simple thumb-operated sort attached to the handlebars. Later I saw rubber hooters similarly attached which needed to be squeezed between thumb and finger. 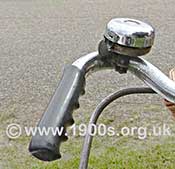 I remember badgering my parents for lights for my bicycle. My parents wanted to know why I wanted them because I wasn't going to be allowed out on a bike after dark. They were right, but anybody who was anybody in my teenage group had them, so I wanted them too. In fact I must have needed them in the winter for cycling home from school. The front light just simply slotted over a support bracket which all bicycles seemed to have, and the back light just clipped onto the bicycle frame or had a similar bracket. Easy as they were to remove, I don't remember any every being stolen.

My first cycle lights were battery operated, so needed new batteries every so often. As time went by, the status symbol jumped up a notch into dynamo lights which never needed batteries. They worked by the back bicycle wheel rotating the dynamo cog. In my naivety, it never occurred to me that these lights would mean that I had to pedal harder. For me, it turned out that they involved a considerable increase in effort.

A very early type of bicycle light was a form of gas light, the gas being produced by dripping water onto lumps of calcium carbide so producing a flammable gas.

There is a separate page on bicycle lights in the blackout of World War Two.

Because bicycles were essential for getting around under one's own steam, they needed to have a means of carrying books and shopping etc. The most common answer was a cane bicycle basket in front, as in the photo.

Attached at the back was a leather-look-alike cycle bag which was, I believe, made of something called 'American cloth'. Various sizes were in use. Mine was fairly small because all it ever had to carry was the minimum that every cyclist seemed to carry - a cycle cape against rain and puncture repair kit. Men and women in uniform wearing trousers also kept cycle clips to prevent their trousers getting caught up or dirtied by the chain.

There were various modifications to basic bicycles to make them suitable for deliveries. Containers for large loads were attached to the bicycle frame not the handlebars so that load would not affect turning. 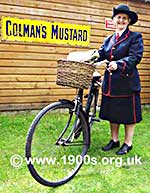 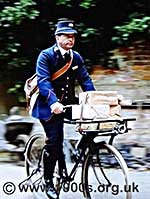 Certainly gears did make cycling easier for cycling up hills - or at least they were supposed to.

The gear system was different from those of today.It was contained in the back hub and operated from a switch/lever on the handlebars. It always seemed to supply just three gears and was known as a 'three speed'. 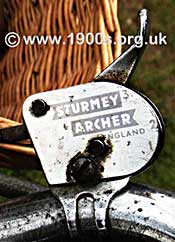 The problem was that its adjustment was critical. Neither I nor my father nor anyone else I knew seemed to know how to adjust it, and it slipped dreadfully. What this meant was that I would be pushing hard down on the pedals up a steep hill when the pedals would suddenly give way. As I was pushing with all my force, this jarred me dreadfully. I ended up cycling everywhere in top gear - which never slipped - and walking up hills. I would have been better off not to have had gears at all.

Although my very first children's bike had solid tyres, bikes for seriously getting around had air-filled tyres, ie tyres with a thin rubber inner tube and a thick outer tyre. The inner tube had to be pumped up with a bicycle pump which was always carried slotted against the bicycle frame.

Tyres never seemed to stay pumped up for long, so before setting out one had to check them and, if necessary pump them up. It was best to keep them pumped up hard because then they were less likely to puncture.

I have been unable to find a picture of an old bike with its pump still attached - even though all bikes were originally sold with their own pumps and all the old bikes still had the hooks on the frame for holding a pump.

Punctures were a way of life, which is why saddle bags invariably carried puncture repair kits.

Yet I can't remember ever having to repair a puncture. Probably my punctures were slow and I managed to get home and ask my father to mend them. I did know how to do it, though, because it was drummed into us at Guides and Scouts and various other places. The inner tube had to be exposed using the special tools in the repair kit and then moved around in a bowl of water to watch for bubbles. This located the puncture and it was mended with a patch from the repair kit.

How to mend a bicycle puncture by the roadside

I sometimes had to mend a bicycle puncture by the roadside where there was no bowl of water. The trick to locate the puncture was to turn the bike upside and attempt to blow up the tyre listening carefully with one's ear to the tyre to find where it was hissing. Then the inner tube had to be exposed at that point and the patch applied.

In one way cycling was fairly safe because there was so little other traffic on roads. In another way, though, it was exceedingly dangerous because cycle helmets were unheard of. If one fell off a bike, there were cuts and bruises but, although I never knew of anyone who got a head injury, they must have happened.

Because cycling was a way of life for getting around, people had to cycle when the weather was unsuitable. So most cyclist had experiences of skidding on ice. We just cycled through rain, having put on the cycle capes which we carried in our saddle bags.

In the late 1940s, when I must have been six or seven years old, I was given a two-wheeler bicycle as a cast-off. The fact that it was a cast-off is important for the point I am about to make because it probably relates more to the 1930s or even earlier, as so little was new in the war and the years of austerity afterwards. The bicycle had solid rubber tyres, i.e. they did not blow up with a bicycle pump. Consequently there was no cushioning over bumps in the road - not that it worried me. I knew no different.

In my childhood in the 1940s I had a tricycle with solid rubber tyres. Only "posh" ones had tyres that pumped up.

Solid rubber tyres on a child's tricycle, courtesy of Laurie Prior with permission from Anticuario Antiques, Glasgow.

Note that the tricycle has no brakes. It probably had a 'fixed wheel' so that braking was by stopping the peddles going round by attempting to back-pedal.

There is quite a lot about bicycles used in different situations on other menus. You can find them by using the search box. Just search on bicycles.