Family cars started to trickle back onto British roads after the end of the Second World War. These were cars that had been stored away in garages during the war because petrol had only been available for essential work.

Consequently many of the cars that I saw as a child in the 1940s were old ones from the 1920s and 1930s. Some were even earlier. What struck me particularly about these old cars were their indicators for turning left or right. 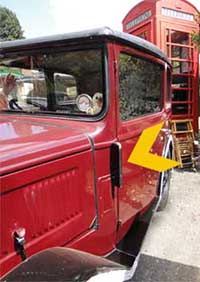 A car with its indicator closed flat against the car body for driving straight, not about to turn left or right

These old cars indicated that they were turning left or right with a control that swung out a little lever-like arm - see the photos. These were widely known as 'flippers' but their formal name was 'trafficators'.

The trafficator system was not at all satisfactory because the mechanism tended to jam so that the flipper was either stuck in or out all the time, irrespective of whether the car was about to turn. I learnt later that there was a bulb inside some trafficators which was supposed to draw attention by lighting up. It speaks for itself that I never knew this at the time.

Why trafficators were unreliable and dangerous

Trafficators sat in a recess, which could become gummed up with dirt, grime, polish and all manner of things, and they could be frozen stuck in winter. Water could seep into the aperture and (maybe because of this) the solenoids that worked the arms failed or jammed. Bulb life was not brilliant either, possibly because the trafficator arms opened and closed with a bit of a 'thwack'. Trafficators were also a pedestrian liability. They would suddenly pop out at head, throat or arm level and I understand that several people were injured by them.


My father said that if you turned the engine off before the trafficator had come in, it would stay sticking out and he had broken several by getting out and walking into them.

Trafficators on buses and lorries

Some buses and lorries were fitted with trafficators which were usually somewhat larger than those on cars and vans. Some buses also had complimenting left and right pointing illuminated arrows on the rear, and these were often retained after the advent of flashing indicators.


Were hand signals the answer?

As far as I know there were no indicator on vehicles at the time for slowing down.

The solution to this and the unreliability of trafficators was seen to be hand signals. The driver opened his window and stuck out his arm as explained in some detail on the traffic control page.

As you can imagine hand signalling was not a rapid reaction process. To add to the problem, it relied on the driver behind having to concentrate on the car in front rather than on the road generally.

The fact that trafficator indicators did not result in more accidents must have been due to there being so little traffic on the roads.

Why hand signals were essential with trafficators

My first car was a 1960 VW Beetle with trafficators, which, after use, I always had lean out of the window and slap down again by hand because they refused to retract into their slots. This was easier on the driver's side of course. So if I didn't have a travelling companion to do the slapping-down on the nearside, every time I turned left I had to resort to hand signals, knowledge of which was mandatory for the driving test in those days.

I reckon that the law allowing flashing indicators was probably around 1954. My reasoning is as follows:

My Dad had a 1954 Vauxhall Velox (Caribbean Blue metallic, blue and grey upholstery, RKT 918 if memory serves) which certainly had trafficator indicators. He replaced that with a 1956 Cresta (black, brown leather seats SGN 334) which definitely had flashing indicators.


From trafficators to today's flashing indicators

The changeover from trafficators to today's flashing indicators was a process.

As I recall, the 1955 Vauxhall models had flashing indicators by way of tricky wiring of the stop lights at the back, so that if you were braking both stop lights came on but if you were braking and indicating, only one brake light flashed while the other stayed lit. In 1956 the cars had separate amber flashers front and rear. 1957 saw a further change for the rear lamps, they were all incorporated into one enlarged unit, whilst another new grille helped tidy up the front.

Vauxhall did a rapid rewiring job and saved themselves the cost of trafficators for the price of a flasher unit, were criticised because the chosen quick fix was fairly unsatisfactory, improved things for 1956 but at the cost of extra lamps and finally got it sorted for 1957 only to have the 'E' Series replaced by the 'PA' series for 1958.