When I was a child in the 1940s and 1950s, petrol was the fuel for cars and lorries. It was sold in buildings known as garages.

Why petrol stations were called garages

Garages did more than just sell petrol. They invariable employed mechanics who could make repairs to cars. In those days, car engines were not as complex as they are today, so it was not unreasonable for mechanics to be adequately familiar with the engine of any make of car.

Garages that I saw at the time were not normally custom built. They were in buildings built for other purposes and adapted, as shown in the photos.

Typical old urban petrol stations (then known as a 'garages'). 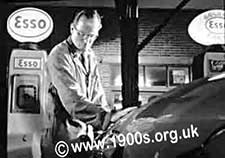 
In rural areas, though, where space was not at a premium, there were garages that might be called custom-built, although they were more like elaborate sheds.

A rural garage which doubled as a car mechanic's workshop. Photographed in Tylford Rural Life Centre

Filling up with petrol: garage attendants

For much of my life and earlier, it was unheard of to fill one's car oneself.

All garages had one or more attendant who kept a look-out for customers and came out to them to fill their cars. The driver paid through the window; change was brought back to him - or very occasionally, her; and the customer never had to get out of the car.

Garage attendants always seemed to wear dirty overalls, so perhaps filling cars was dirtier in those days or perhaps the attendants also doubled as mechanics. Either way, customers kept their hands and clothes clean.

The spiralling costs of petrol has been a feature of driving during my lifetime and I wish that I had kept a record. What I can remember from around the end of the 1960s was a student announcing to a group, "Do you realise that petrol is set to go up to 50p per gallon!?" Everyone was amazed and incredulous. If you have any recollections from the early days, please get in touch.

The design of petrol pumps changed over the years. The following pictures are presented in what I believe may be date order - unless you know different. However, almost certainly designs were phased in and out.