When I was growing up in the 1940s and 1950s, most car owners seemed to belong to the AA (the Automobile Association) to help them in the event of breakdown, etc. Their cars sported a badge to prove it which came free with membership. These were usually attached somewhere on the front of the car either on the radiator or above the bonnet.

An AA badge for attaching to the front of a car to show membership of the AA. Note the membership number embossed at its base.

This was a time when neither drivers nor anyone else had mobile phones, but when in trouble on the road, there were other ways of getting help from the AA:

Wait for an AA patrolman to drive by

AA patrolmen, who were also mechanics, would drive around on motorbikes which were readily recognisable. They had yellow sidecars which held various tools and maps. There seemed to be plenty of them, as we always seemed to see one on every road journey. We never needed one, but if we had, we probably wouldn't have had to wait long, provided that we were not in the depths of the country.

These patrolmen were mechanics, widely known as AA men. They wore brown overalls and helmets. 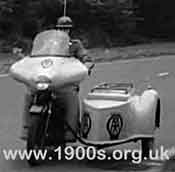 Whenever an AA man saw a car with an AA badge on it, he would salute the driver.

When the AA man did not salute - a warning!

There was an exception to AA patrolmen saluting members of the AA, recognised by the badge on their cars. If there was a police speed trap ahead, the AA man would not salute, and this was a warning. However, because he did nothing, he couldn't then be accused and charged with signalling the traps to motorists. (Before radar speed traps, the traps consisted of policemen with stop watches in separate police cars communicating by radio.)


Find and use an AA phone box or public payphone

At strategic points along main roads and at junctions there were AA telephone boxes at the roadside. (There were of course no motorways.) Members were provided with a key to get into the box and phone for help. There were also public phones but they were few and far between along rural roads, there was no guaranteed that getting to one did not necessitate a long walk.

Flag down a passing car

Traffic was sparse in those days and car drivers seemed to regard other car drivers almost as members of the same social circle who they could call on rather like friends. It was not unusual to be flagged down at a roadside and be asked to be dropped off at the next garage or phone box.

The competition, the RAC

The RAC (the Royal Automobile Club) was a similar organisation. Yet it must have been smaller because I don't remember seeing any RAC men on the roads.

My mother always gave the impression that the RAC was for more affluent motorists than us - but that was the sort of thing she always said.